Recent In-plant Impressions research shows the percentage of in-plants that provide mailing services is growing. In 2022, 64% of respondents reported they handle mail. That figure was 55% just two years earlier.

While the management of mail — whether incoming and/or outgoing — is nothing new, recent pandemic-driven changes in the way people work, coupled with the constant desire to minimize cots, has transformed this service for the State of Tennessee. Kathy Fontana, director of customer support, and Tammy Golden, assistant commissioner of Document Solutions, are at the forefront of these efforts. 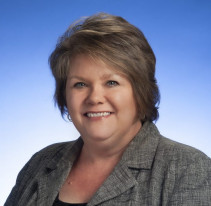 Document Solutions, which operates under the State of Tennessee’s Department of General Services, is headquartered in Nashville. In addition to fulfilling the state government’s communications and transactional printing needs, Document Solutions’ responsibilities include mail services, scanning, and photography. To facilitate its mailing efforts, the in-plant houses a portfolio of inserting, pre-sorting, and metering machines for outgoing mail, as well as scanners and smart lockers for incoming mail.

The integration of Tennessee’s printing and mailing services is facilitated by a Ricoh InfoPrint 5000 continuous-feed inkjet press, as well as two Xerox Nuvera digital presses, equipped with MICR toner to enable the printing of checks. According to Fontana, the shop practices standard daily turnaround of printing and mailing orders.

“All files received during the day are started on third shift, printed, and then sent to the postal department for metering, sealing, and pre-sorting,” she notes.

Pre-sorting is done on the back end of the process, Fontana says, through a Pitney Bowes Vantage sorting system that uses bar codes to sort by three-digit or five-digit zip codes.

“It ensures integrity,” she explains, “not just for sorting, but also for the inserts.”

In the last year, adds Golden, the shop mailed 30 million pieces. Most of the envelopes used, says Fontana, were also printed in-house.

Verification of addresses, Fontana explains, “has to be done ahead of time. It needs to be done to the list before mailing receives the files. Fortunately, we don’t have to get involved in that.”

Golden clarifies that the state government mandates how address lists are managed. To ensure incorrect pieces are not inserted, the shop used Pro Conductor software from Crawford Technologies, which creates a closed-loop system to identify inconsistencies.

“The system will stop if there’s an inserting error, and the data file becomes the audit trail for the job,” Golden says.

During the COVID-19 shutdowns, says Golden, state workers — a majority of whom were working from home — still needed to receive their mail. Driven by necessity and the need to get incoming mail to recipients, the in-plant set up a mail room where different state agencies could pick up their mail. Further, in the state’s multi-tenant office buildings, she says, smart lockers by Quadient were installed.

“The mail needed to be secured,” she says. “We were no longer delivering floor-by-floor.”

The smart lockers, says Golden, consist of four units with 64 service doors each. They were put in place through funding by the CARES Act. 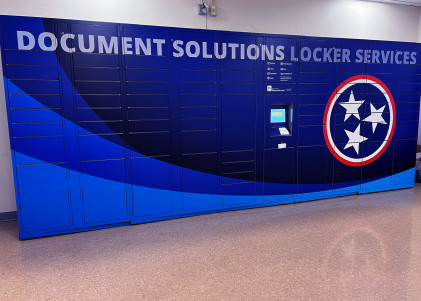 Document Services’ secure smart locker systems allow remote workers to retrieve mail when they’re ready, instead of having it pile up on their desks.

“We had seen them in universities,” she says, “and realized they would be good for the government. This is our solution for secure delivery.”

The lockers are front-loading and fully automated, Fontana says, and run using Quadient’s WTS (web tracking system) software. Every item either arrives with or is assigned a tracking number. The designee for picking up mail for each department has an email address that is tied to the tracking number. An email is triggered when the locker door is closed, notifying the appropriate person that something has been placed in their locker. When the employee gets there, that person scans the bar code and the door will pop open.

If mail is not picked up, Fontana says, the following day’s mail will be placed in a separate door, which is easier than canceling one location and combining the mail. Employees simply need to scan two bar codes.

“We have plenty of lockers,” Golden says. “If it’s not picked up in a week, we’ll contact them and they may have to pick it up from our primary location.”

In addition to delivering physical mail, says Fontana, “we also scanned incoming mail for people working from home. It was a full service for state agencies.”

That process, says Golden, was already in place because the in-plant scanned and stored inactive records. Staff had to make judgement calls about what should be scanned and what shouldn’t: correspondence versus catalogs; confidential versus inconsequential.

Currently, Golden says, most state employees are working hybrid schedules — coming in one day per week. Even so, the electronic delivery of scanned mail remains useful. While staff time is required to do the scanning, Golden says it is better than the alternative, which is having office workers drive downtown for their mail.

Once mail is scanned and delivered, it is then shredded, unless a specific department or agency requests otherwise.

“It enabled a lot of process improvement and improved our turnaround time,” she says.

The consolidation also opened the door to cross-train employees, enabling them to be shifted to where the need is greatest on any given shift.

“If there is a problem in printing, we can be flexible with time and staffing to buffer the process and keep things running smoothly, Fontana adds.

The in-plant has seen significant cost savings by expanding the use of bar codes in production. The savings result from an elimination of overtime associated with previous, non-automated workflow, and because the bar codes create an audit trail. Time is no longer spent trying to determine if and when an individual piece was sent.

Also, implementing continuous-feed inkjet has been a boon for the in-plant, enabling it to move from three- to five-day average delivery times to all work being out the door the next day, “even though volume has gone up,” Golden says.

About the consolidation effort, the benefits are many. “When you’re managing the process end-to-end,” Golden says, “you can see the issues and bottlenecks in the process. It’s better to manage the process as a whole. It saves money and it’s more efficient.”

Document Services for the State of Tennessee recently received the 2022 IPMA Innovation Award, which recognizes an in-plant that has undertaken creative, innovative ways to improve a process or business model.

“We worked with the Department of Revenue to help them save money on motor vehicle renewal notices,” says Kathy Fontana, director of customer support. “The effort was to help them convert what was a multi-page document in an envelope to a postcard.”

That successful effort, at its one-year mark, she says, has saved the state $1.4 million in postage and services costs.

Fontana says the effort to change the renewal notices had been recommended for a couple of years. She adds that while the project was not Document Services’ idea, it was the in-plant’s project to address.

“We got involved,” she says, “and figured out a process for doing it efficiently and in a timely manner.”

The result, a two-sided 6x4" postcard, underwent well over 20 versions in development. In its finished form, the postcard has 25 variable data fields on both sides of the postcard.

“It continues to be fine-tuned,” Fontana says.

Before the newly concepted notices could be sent out the to the tax-paying public, Document Services ran tests for many months, including trial mailings that were not sent. Initially, the job could not be run in-house, so an outside vendor was tapped to run the job for a year.

At the time, new equipment was needed to enable so many different fields to be merged. Those services, Fontana says, are now performed in-house.