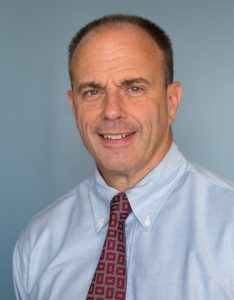 When the proposed acquisition of LSC Communications by Quad/Graphics was first announced on Oct. 31, 2018, the companies reported that the coupling of the two printing industry behemoths would generate approximately $135 million in annualized net synergies in two years, including $60 million in capacity rationalization savings.

Although the proposed merger won't be finalized until mid-2019 — as well as the fact that LSC and Quad are still operating as two independent companies — it appears LSC Communications is taking a preemptive step to align customer demand with its production capacity.

Earlier this week LSC Communications informed the 369 workers at its Lynchburg, Va., printing plant located at Murray Place that it intends to close the Lynchburg facility by June 30, according to reports filed by several Lynchburg-area news outlets. LSC's Lynchburg employees were reportedly notified of the permanent closure of the former RR Donnelley facility — which dates back to the 1970s — during a meeting shortly after the start of their shifts on Tuesday.

As federally mandated, LSC Communications has also filed a WARN ACT notification (which is required for companies with 100 or employees) with the Commonwealth of Virginia announcing its plans to close the operation.

Lynchburg (Va.) Mayor Treney Tweedy addressed the plant's impending closure at a City Council meeting the same day she heard of the closure. "I want the citizens of Lynchburg affected by this closure to know that we stand by you and will work diligently with the company and its employees through this transition," WDBJ7 reported Tweedy as saying. "We always try to do anything we can to keep local employers here. But the markets change, demands shift and companies will adjust accordingly."

Virginia is also deploying its Rapid Response Team, in tandem with other state and local agencies, to meet with local LSC officials and help the displaced workers secure all of the severance benefits due to them, to access any available job retraining programs, as well as to assist them with creating resumés and filling out job applications.

This latest closure marks a blow to the manufacturing job market, local communities and corporate tax base in that region. In 2017, I reported on the closure of LSC Communications' 278,000-sq.-ft. book manufacturing plant in Salem, Va., which was located about 65 miles west of Lynchburg in Roanoke County. The shuttering of that facility impacted approximately 140 workers.

The Lynchburg plant closure announcement, albeit made unilaterally by LSC Communications, will likely be the first of similar overall manufacturing capacity reduction moves leading up to, and especially after, LSC and Quad/Graphics begin to combine their operations starting the middle of this year. 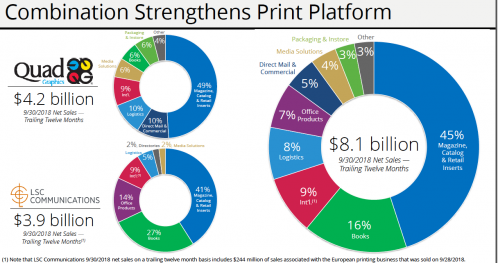 Here's a breakdown of both the individual and combined print product segment mixes once, and if, the acquisition of LSC by Quad is completed by mid-2019. (Click to enlarge)

Assuming the acquisition of LSC by Quad passes both regulatory (antitrust) and shareholder approval, the $1.4 billion, all-stock transaction will create a combined $8.1 billion, publicly-held company. (Click here to access my commentary on what drove that Oct. 31, 2018, transaction announcement.)

Once finalized, the combined company — which will maintain the Quad/Graphics name — will surpass formerly No. 1-ranked RR Donnelley to become the largest printing company in the U.S. and Canada, as ranked by annual sales, according to the most recent Printing Impressions 400 list (click here to access the complete Printing Impressions 400 rankings).

Currently, Sussex, Wis.-based Quad/Graphics is a $4.2 billion conglomerate that employs 22,000 workers worldwide with 55 manufacturing and distribution facilities. Comparatively, Chicago-based LSC Communications — an enterprise formed more than two years ago as part of a three-company spinoff of RR Donnelley — is a $3.9 billion global company with nearly 22,000 employees and, for now, 59 current manufacturing and distribution facilities. Like Quad, LSC derives a large portion of its revenues from publication, catalog and book printing.