A Look at the Philadelphia Eagles' Successful Kick-Off Campaign

Philadelphia Eagles football fans sometimes get a bad wrap. After all, throwing snowballs at Santa Claus doesn’t make for great impressions. But the Eagles are part of the culture here; and diehard and casual fans alike are euphoric about the upcoming Eagles-Patriots Super Bowl showdown. Win or lose, just making it to the championship game is a victory for the franchise and its fan base, given all of the adversity and injuries the team has overcome this season. That’s the Philadelphia spirit. And that’s why it’s worth taking a look at a really clever print and digital marketing campaign that Intersection created last August for the Eagles. 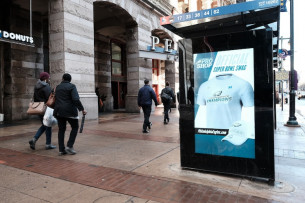 This digital display from Intersection proudly displays the Eagles victory as they head to the Super Bowl. (Click on the image to enlarge)

According to Jon Roche, general manager for Intersection in Philadelphia, the campaign was designed to generate buzz for the NFL season, a campaign that, thanks to the Eagles on-the-field success, continued through the playoffs. The season kick-off campaign featured a broad mix of media, where a range of digital and print ads were deployed - on buses, trains and other signage throughout the city - in several phases to engage fans and sustain excitement for the team as the season progressed.

“For example, during pre-season, we highlighted individual players and displayed broadcast tune-in times for the games in ads around town. And, once the season was in full swing, fans were given real-time score updates through our digital displays,” Roche explains. “The campaign also focused on digital assets and related content to keep fans updated on the Eagles’ playoff run.”

To see some of the print and digital ads that Intersection created for the Eagles Campaign - from the season kick-off to the Eagles victory last week - please view the image gallery below: 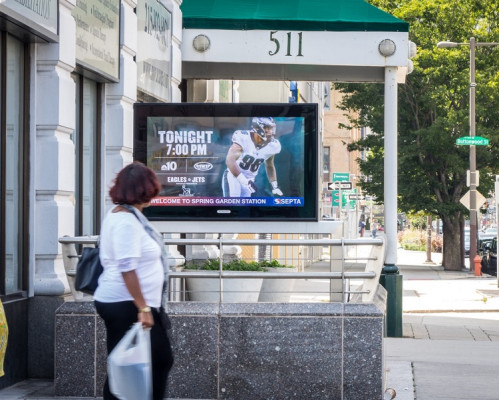 A passerby looks at the display promoting the Philadelphia Eagles on a digital urban panel.

An ultra super-king bus wrap featured on a Septa bus to promote the Eagles season kick-off.

Another example of Intersection's ultra super-king bus wrap featured on a Septa bus to promote the Eagles season kick-off.

As part of the Eagles campaign, Intersection created full wraps and ultra-super kings on buses and trains, like this one here. 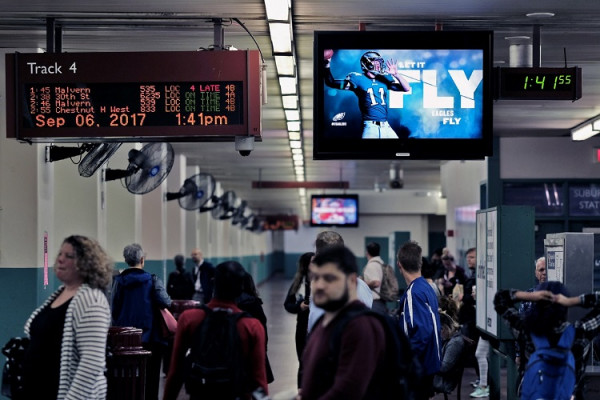 A digital ad for the Philadelphia Eagles, sits just above the platform of Philadelphia's busy Suburban Station. 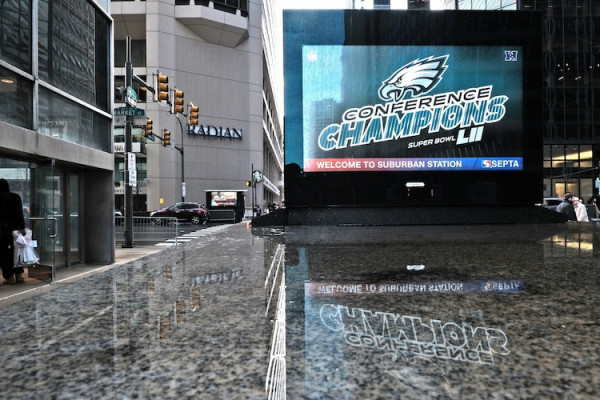 This digital display from highlights the Eagles' victory as they head to the Super Bowl.

On the streets of Philadelphia, one passerby passes a digital display promoting the Eagles win.

Roche says that overall, the combination of print and digital resulted in a very successful campaign that continued to evolve, keeping Philadelphians engaged for the full span of the football season, including the playoff run. The campaign not only worked to increase the excitement for the team each week, but also connected the Eagles with their fanbase and younger audiences, in addition to driving engagement on social media platforms. As a result, the campaign generated millions of impressions.

“This has been an effective campaign that heightened excitement for the Eagles each week, helped the team connect with the public transit commuter audience, and created user-generated content about the team across social media platforms,” adds Roche. “We have been able to not only engage and excite existing Eagles fans, but also the broader city of Philadelphia, through ads and digital displays located in high-impact areas that integrate with Philadelphians’ daily journeys. From buses, to subways, to transit stations, our campaign engaged Philadelphia residents.”

Having executed this campaign for the past few seasons now, Brian Papson, VP of marketing for the Philadelphia Eagles, points out that the Eagles are part of the football culture in the city. “When fans see the SEPTA wraps or the digital billboards around town, they know that it’s football season. The campaign engages the entire city and rallies everyone around the Eagles, which is one of the strongest bonds that folks in the region share with one another.” That bond will be on full display during the Super Bowl buildup.