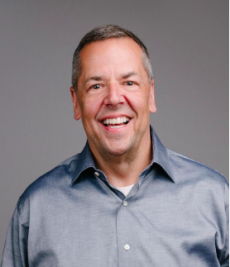 Charles "Chuck" Gehman passed away unexpectedly at his home in Chaska, Minn., on Aug. 6. He had been battling a rare form of esophageal cancer since late last year. As a GoFundMe page that was set up for his family following Chuck's death indicated, "He endured a range of brutal treatments, suffered numerous side effects, but remained upbeat, physically active, and continued to work and play. We were optimistic about his upcoming surgery, but instead are here now in grief."

Chuck is survived by his wife, Jamie Gehman, and three daughters. Sadly, he was not able to help send his first-born daughter off to start college this month.

Chuck worked for several graphic arts industry organizations — both on the supplier and the printer side — during his career. From 2000 to 2002 he served as executive VP and CTO for MarcomCentral. From there, Chuck spent five years at EFI, serving as director of product development. After departing EFI in April 2008, he joined New York-based Mimeo as VP, product platforms, where he worked almost five years leading a team that built its customer-facing Web-to-print platforms. After leaving Mimeo, he spent a year at Taylor Communications' (Standard Register) Dayton, Ohio, operation as VP, customer facing technology and chief architect. And he held other positions within the graphic arts industry, as well.

Chuck also held similar product development roles outside the printing industry at WAND Corp., and was working as a technical marketing engineer for Perforce software at the time of his passing.

As Patrick White, of White Associates, wrote in a LinkedIn recommendation, "When Chuck speaks, his voice is a good metaphor for who he is. It is soft, yet it somehow conveys the depth of his knowledge and the power of his ideas. And without any arrogance whatsoever, you just know Chuck is the smartest guy in the room.

"He's the type of manager who, when he's part of a team, makes the rest of us feel like we are part of something bigger than the sum of its parts. If you have a chance to work with Chuck, rest assured he will provide you with peerless insight anchored by old-fashioned work ethic."

According to an obituary notice, a celebration of life will be held on Saturday, Aug.15, with a visitation starting at 1 pm and a funeral service at 2:30 pm — all at the Bertas Funeral Home, 200 W. 3rd St., Chaska, Minn. Following the service everyone is invited to the Gehman home for an outdoor gathering. As has become common in these current times, masks are mandatory, as well as social distancing.

Those interested in signing a guestbook, or sending a sympathy card or flowers, can click here for a link to the funeral home.