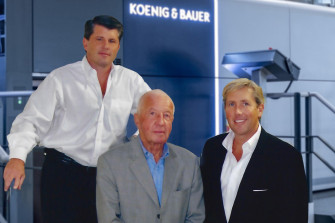 With demand for corrugated packaging continuing to rise, Litho Press, an Indianapolis printer serving the corrugated and retail signage industry, has made a critical move by investing in a new Koenig & Bauer Rapida 145 (41” x 57” maximum sheet size) that solidifies its reputation as an industry leader, an innovative and creative business, that delivers the fastest product in the marketplace.

“There’s been a tremendous need for corrugated packaging and it has been rapidly growing in the past several years,” says Bernie Lacy, president of Litho Press. “The most important factor for us is to meet our clients’ demanding schedules and reduce turnaround time as much as possible. The new Koenig & Bauer press will give us that extra firepower, expand our production capacity by more than 25%, and its automated systems will reduce our turnaround time from two to three days to one to two days, making us by far one of the fastest shops in the industry.”

“What drove our management team to choose Koenig & Bauer is our utmost level of trust in them and their high level of service and build quality,” says Lacy. “This press promises to be operating at such a high level of autonomy, providing performance to make us more profitable, delivering high print quality, superior makeready and turnaround, and additional key benefits.”

As a certified G7 Master Printer, Litho Press delivers the very best color management for its clients’ products. Its proofing systems and presses are calibrated and maintained for optimal quality control, which provide consistent, accurate color from proof to print. Its new Rapida 145 is equipped with unique inline quality measurement and control systems such as the Koenig & Bauer QualiTronic ColorControl that ensures consistent print quality.

Among its additional innovations, the new Rapida 145 accepts unbent plates, which eliminates a step in pre-press, and its simultaneous roller wash works on UV applications. It has a new cold foil module delivering foil savings. Ink color can be changed in less than two minutes, due to upgraded ink ducts.

Press operators at Litho Press will appreciate the Rapida 145’s new touchscreen operating panel, which comes with a press status display at the delivery end. To meet a client’s demanding schedule, Litho Press operators can easily check an app to find details on the current job and the next in line. Newly-released Koenig & Bauer’s Job Optimizer will analyze all parameters of their job list and workflow to ensure optimum productivity.

Ever since his father and grandfather started the business in 1953, Bernie and his brother John have continued the family tradition of always seeking out the very latest in print technology. Today sales are posted at $31 million per year. “We believe the new Rapida 145 will provide us with unparalleled levels of productivity,” says Lacy. “With its high speed, quick makeready, and connectivity, the Rapida 145 is truly a press for the modern era. We’re proud to be the first to have this particular press in North America, the most powerful large-format Rapida that the market has ever seen.”