US Lawmakers, Printers and Publishers Testify Against Crippling Import Tariffs on Canadian Newsprint 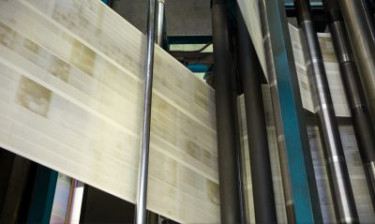 U.S. newspaper publishers and printers, in particular, are reeling from up to 32% import tariffs that are being imposed on Canadian newsprint. | Credit: Getty Images

With all of the talking heads on television news stations pontificating about the prospects for an international trade war initially fueled by tariffs that have been implemented by the Trump administration - including imported steel and aluminum - the import tariffs that are currently being imposed on Canadian uncoated groundwood papers (newsprint) aren't capturing any attention within the electronic media.

Even so, July 17 was a pivotal day for the printing and publishing industry as more than a dozen Congressional lawmakers from both sides of the aisle, publishers, printers, newspaper advocacy groups and newsprint paper producers testified in Washington before the International Trade Commission (ITC) to express their strong opposition to the preliminary paper tariffs.

“The tariffs will hurt the U.S. paper industry because they will cause permanent harm to newspapers, printers and book publishers, shrinking the U.S. paper industry’s customer base,” said Sen. Susan Collins (R-Maine) during her testimony before the ITC. “In fact, the tariffs will likely lead to less production of newsprint by U.S. manufacturers as customers cut their consumption once and for all. This is simply not the way Congress intended the trade laws to work.”

The ITC is reportedly slated to vote on Aug. 28 whether or not to make the import tariffs permanent. And the U.S. Department of Commerce is expected to render its decision on the matter by Aug. 2. Current tariffs on imported Canadian newsprint, which largely impact U.S. newspaper, book, directory and circular printers and publishers, will become permanent if both organizations vote in favor to keep them in place.

In January, the Department of Commerce assessed preliminary countervailing duties on uncoated groundwood ranging from 4.4% to 9.9%, depending on the Canadian paper manufacturer. Then, it later added preliminary antidumping duties, on top of the countervailing tariffs, of up to 22.16%, resulting in total tariffs of up to 32% now being imposed.

The preliminary countervailing and antidumping duties by the Department of Commerce emanate from a complaint filed by North Pacific Paper Corp. (NORPAC), a single-location paper manufacturer located in Longview, Wash., which is owned by a New York-based hedge fund. NORPAC is reportedly one of five newsprint paper mills still remaining in the U.S., but it was the only one to file an antidumping complaint.

Bills Introduced in Both Congressional Houses

In response to the impact of the current paper tariffs, a bipartisan group of lawmakers in the U.S. Senate, led by Susan Collins (R-Maine) and Angus King (I-Maine), introduced a bill in May that would delay dumping tariffs and countervailing duties currently being applied. The PRINT (Protecting Rational Incentives in Newsprint Trade) Act would suspend the import taxes on Canadian uncoated groundwood paper and would require the Department of Commerce to complete a study on the consequences the tariffs will have on U.S. newspapers and the more than 600,000-employee-strong printing and publishing industry in general.

The bill would also suspend any action by the Commerce Department and the ITC on newsprint import duties until President Trump would receive the report and certify that the taxes are in the economic interests of the United States.

Printing Industries of America has also lobbied hard on Capitol Hill against the paper tariffs and sought support throughout the printing industry through its Print Powers America initiative.

For example, STOPP points to an ITC report issued last September that recognizes “newsprint tends to be supplied by producers in that region,” and that pricing subsequently reflects the regional marketplace. The report also found that almost 91% of imported Canadian newsprint comes into the Midwest and Northeast, while only 4.6% enters the Pacific Northwest, where state of Washington-based NORPAC conducts business.

In addition, STOPP notes that the demand for newsprint in North America has shrunk by 75% since 2000, primarily due to the digital alternatives that are impacting newspaper publishers. As a result of the drop in demand, several newsprint mills have shut down, while others have been converted to manufacturing linerboard for corrugated boxes in response to the growth of online shopping. Since 2007, 78 paper machines have been closed or converted, according to the coalition, eliminating more than 10 million metric tons from industry production capacity.

Ironically, the higher prices for uncoated groundwood paper and supply destabilization caused by the import tariffs will also impact NORPAC negatively. If made permanent, STOPP points out, the duties will drive a further reduction in newsprint demand, as newspapers and other print-based publishers have to cut their print production quantities, shift to smaller page counts, lay off workers, seek digital alternatives and, in worst case scenarios, even shut down.