ANDOVER, Mass. - December 20, 2017 - LandmarkPrint of Stamford, Conn. recently acquired the Standard Horizon StitchLiner Mark III as the focus of a new dedicated finishing area in its bindery. With this addition, LandmarkPrint became the first Standard customer in North America to install the new StitchLiner Mark III, the latest evolution in Horizon’s line of saddlestitching solutions.

Looking to expand its offerings and keep pace with increasingly fast turnaround times, LandmarkPrint valued the Mark III for its speed, automation, and support for a wider range of booklet sizes. The company used its Mark III, which can run at speeds of up to 6,000 books per hour, to produce 100,000 books inside of the first three weeks after the installation. “The system is constantly running,” says Carmine Iannacchino, principal and CMO. “It’s so fast that we actually had to put a second person on it to help with loading and unloading. Work that used to take six or seven hours now takes less than two, enabling us to turn jobs around quicker for our customers.” 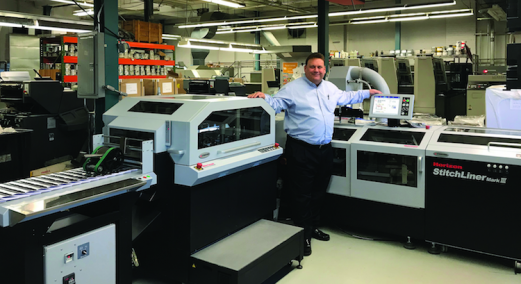 Carmine Iannacchino, principal and CMO of LandmarkPrint, stands next to the company's new StitchLiner Mark III.

Iannacchino also notes that LandmarkPrint has appreciated the Mark III’s automation, ease of setup and use, and the quality of the finished booklet. “It scores and folds on the fly, and the books come out very nice and flat, with a tight spine. Our customers love the finished product.” The increased range of booklet sizes was also critical to LandmarkPrint, and Iannacchino says that they are excited to offer 12” by 12” booklet applications such as hanging calendars to its customers, as well as a variety of smaller sizes.

LandmarkPrint has partnered with Standard in the past, and still runs a number of Standard Horizon solutions, including the BQ-470 Perfect Binder and CRF-362 Creaser/Folder. LandmarkPrint's satisfaction with this equipment made Standard an easy choice for its saddlestitching needs. “Based on the durability and production that our other Standard Horizon products have given us, I consider us covered in the saddlestitching department for the next 15 years,” says Iannacchino.