The 2016 Konica Minolta Dealer Conference, August 27-31, was fittingly held in the rarefied air of Aspen, Colorado’s Aspen Institute against a stunning backdrop of 10,000-foot peaks. There, Konica Minolta executives laid out their lofty vision of the company’s future under the conference theme “Inspiration, Ideation, Innovation.” 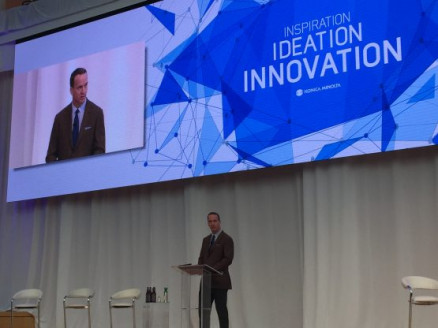 Peyton Manning spoke about lessons in leadership from his NFL career.

Taylor explained that he was particularly proud of the employee satisfaction ratings because “Happy employees equal happy customers.” Taylor said the key to building a great “workforce of the future” is understanding the psychology of millennials, who will be 75% of the workforce by 2025. Taylor believes that millennials do not get excited about selling MFPs but will find Konica Minolta’s aspirational Office of the Future and IT Services initiatives compelling.

Shoei Yamana outlined major opportunities for Konica Minolta including a “drive to digitization” in the global commercial and industrial printing spaces where current rates of digitization are only 4% and 2.7%, respectively. These markets collectively represent 90 million Yen in annual economic activity.

Beyond the production print space, Yamana highlighted the company’s strong positions in “Connected Healthcare,” “Monitoring and Security” and as an “Integrator of Technology” that will turn change into opportunity for its dealers as it guides them into new market accounts selling “bundles of services” instead of just boxes.

On the equipment side, Senior VP of Business Development, Kevin Kern introduced a new brand, “Accurio,” which will be the moniker for the AccurioJet KM-1 and KM-C Presses.

The AccurioJet KM-1, which unlike other inkjet presses requires no pre-coating or costly inkjet papers, is now in beta testing and will see its first five global installations occur in the U.S. market.

The AccurioJet KM-C, which will be in beta in 2017, will be able to print on an even wider array of substrates including folding carton and corrugated, and will print fully variable packaging. With a 40” or B1 sheet size, the AccurioJet KM-C will be able to print six-up, which is 50% more throughput per sheet than competitive presses, making it a workhorse of the $47 billion carton printing market.

Other packaging announcements include the expansion of Konica Minolta’s partnership with MGI through the acquisition of 41% of the company. The MGI lineup, which Konica Minolta dealers will be able to sell, includes the Jet Varnish and Meteor series of presses offering dimensional printing, foils and varnishes to be applied primarily to packaging, labels and direct mail.

Dino Pagliarello, Konica Minolta’s VP of Product Management and Planning, discussed the bizhub C71cF, a $250,000 digital label press. Pagliarello stated that the digital label and carton printing market is forecast to expand by 41% from 2014-2019, with three out of four labels to be produced digitally by 2020, according to InfoTrends. The digital label market is dominated by food and beverage, said Pagliarello, and the C71cf will facilitate short-run and versioned labels such as those found on “Christmas Ale.”

Konica Minolta provided A-list entertainment to their dealers including an intimate acoustic set from John Oates, one half of the number-one, best-selling duo Hall and Oates. A Western-themed evening on the final night included a live auctioneer awarding top Konica Minolta dealers such prizes as a Tesla and a VIP Superbowl package. To cap off the festivities, a private concert was given by a nine-piece band led by Taylor Hicks, winner of reality TV show American Idol, Season Five. The Taylor Hicks band was joined on stage by none other than Konica Minolta’s own Senior VP of Business Development Kevin Kern, who performed several songs on vocals and guitar including a rousing rendition of, “Secret Agent Man.” Meanwhile, President and CEO Rich Taylor could be seen bringing trays of drinks to his enthusiastic dealers during the concert.