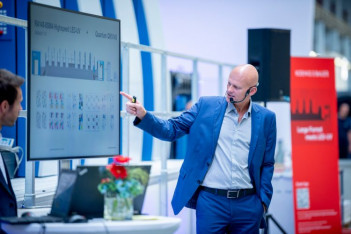 Dirk Winkler, head of printing process technology at Koenig & Bauer in Radebeul, described the 13 print jobs in detail before the practical demonstration began

WÜRZBURG, Germany - September 13, 2018 - At the beginning of September, Koenig & Bauer placed large-format sheetfed offset in the spotlight again in Radebeul. The latest customer event left packaging printing to one side, however, and instead shifted the focus onto highly efficient commercial production, web-to-print and online applications. The press on show was an eight-color Rapida 145 with perfecting unit for 4-over-4 production. The highlights of this press included LED-UV dryers to enable immediate further processing, as a world premiere in large-format perfecting, a large-format reel sheeter of the latest Quantum generation, the high production speed of 15,000 sheets/hour in perfecting mode, and the autonomous printing of multiple jobs and job sections with ErgoTronic AutoRun.

Dirk Winkler, head of printing process technology at Koenig & Bauer in Radebeul, took general and current demands of the print market such as fast makeready, low waste, ultimate quality and high outputs as the starting point for his presentation of automation solutions and unique features of the Rapida sheetfed offset presses specifically for the commercial and online market. These included the DriveTronic dedicated drive components which actually make simultaneous processes possible and thus contribute significantly to makeready reductions. The same can be said of the CleanTronic washing systems for optimised, parallel washing processes matched to each individual application. Fast, high-performance inline measuring and control systems (QualiTronic), a broad spectrum of VariDry dryers and end-to-end digital workflows are further key factors for extraordinarily cost-effective print processes.

Alongside general plus points such as fast further processing, improved print quality on uncoated papers, the elimination of odours and heat input into the substrate, waste and energy savings compared to other drying processes, reduced powder and coating consumption and less need for cleaning of the post-press machines, the LED-UV process offers further benefits particularly for perfector presses, for example:

The eight-colour Rapida 145 in Radebeul was fitted with two LED-UV dryers, one above the storage drum of the perfecting unit and one in the swan neck of the delivery. It was also configured with a DriveTronic feeder, the sidelay-free infeed DriveTronic SIS, and simultaneous plate changing using DriveTronic SPC and Plate Ident. CleanTronic Synchro (including CleanTronic UV) provided for parallel and thus ultra-fast washing processes. 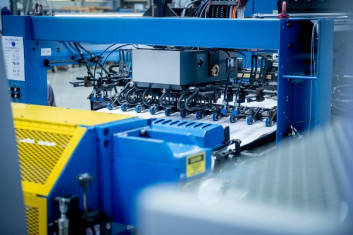 The reel sheeter in action at the maximum press speed of 15,000 sheets/hour

The print demonstrations began with the production of content pages for a magazine on 80 g/m2 paper. This paper was supplied on a reel and cut into sheets at the full production speed of 15,000 sheets per hour on the reel sheeter. Subsequently, the audience was able to witness fast conversion of the feeder for production using sheets from a pile, in preparation for printing of the magazine cover on 150 g/m2 glossy paper.

The next jobs were three sections of a cookery book, for which the substrate was changed yet again to a 115 g/m2 matt paper. The job changes between the individual sections were realised fully automatically in an AutoRun process. As a result, only 1.5 minutes passed between the last good sheet of the old job and the first good sheet of the new job. These jobs were followed by another cover on 200 g/m2 glossy paper and two sections of a travel guide on 135 g/m2 glossy paper.

The presentation was rounded off with a series of five jobs typically handled by an online printer. The first three were corridor-free gang formes with flyers requiring run lengths of just 300 copies each. Again making use of the AutoRun function, production was here so fast that the helper on the press had his work cut out to remove the old plates from the plate changers and to insert the new ones in time for the next change. The jobs also switched back and forth between formes with high and low ink coverages, illustrating one of the particular strengths of an LED-UV process when printing gang formes. To conclude, two further gang formes with business and greeting cards were printed on 350 g/m2 board. For these jobs, the printer disengaged three inking units at the press of a button, enabling 4/1 production to proceed with any delay for roller washing and without the need to apply roller oil in the unused units.

The print demonstrations were about more than just live print production on the Rapida 145, however. On external monitors, the visitors were able to follow how press data were gathered in the production planning system LogoTronic Professional and transferred to the management information system (MIS). The LogoTronic cockpit displayed all important production parameters, and it could be seen, for example, that the net production output was still 13,000 sheets/hour despite the many job changes. All makeready times were documented and the OEE (overall equipment effectiveness) was calculated and displayed. The Koenig & Bauer specialists explained the JDF/JMF workflow and use of the MIS Optimus Dash in daily commercial and online print production.

Further presentations were devoted to data-driven Connected Services, Visual PressSupport and use of the Rapida LiveApps for decentralised press operation, maintenance, inventory management and consumables tracking.

The conclusion reached at the event: Assuming a corresponding job pool, the Rapida 145 perfector is an ideal means of production for both long runs and jobs requiring only 250 sheets. The high production speed permits the efficient processing of long runs, while fast job changes with AutoRun enable extremely economical production when short runs are the order of the day.