WÜRZBURG, Germany — August 9, 2017 — After a good start to the year in which Koenig & Bauer celebrated its 200th anniversary, the group is able to report favorable business performance in the second quarter of 2017.

“The successful trade shows Print China in Beijing, interpack in Düsseldorf and METPACK in Essen contributed to a substantial year-on-year increase in order intake in packaging solutions for cardboard, metal decorating, marking and coding and glass and hollow container printing," explains CEO Claus Bolza-Schünemann. "Despite this growth and the expansion of service business, the order intake of €601.9m was slightly down on the previous year’s figure of €618.8m, which had been spurred by major security press orders."

With group revenue dropping slightly to €538.9m compared with the previous year due to more deliveries in H2, the order backlog remained high at €620.5m. 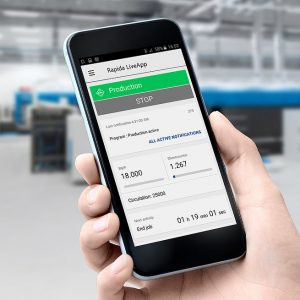 Autonomous printing — made by Koenig & Bauer: KBA-Sheetfed is setting new benchmarks in sheetfed printing with AutoRun and the Rapida LiveApp.

Dähn also adds, "In addition to the continued expansion of service business, profitable growth will be particularly driven by our existing and new solutions for printing, finishing and postpress processing of packaging as well as our industrial digital printing applications."

Group Earnings Boosted by the Substantial Increase in Sheetfed Profit
Order intake in the Sheetfed segment grew by 12.2% to €326.3m thanks to increased service business and more orders for medium-format presses. The flatbed diecutters for postprint processing of cardboard and corrugated also made a gratifying contribution to growth. Revenue rose by 5.5% from €291.7m in the previous year to €307.8m. The additional revenue with better margins and lower costs resulted in a substantial increase in segment profit to €12.1m (2016: €8.6m).

Solid order intake of €85.7m was achieved in the Digital & Web segment. With revenue declining to €68.3m (2016: €75.5m), the order backlog rose from €92.3m to €93.6m. The EBIT of –€ 2.8m (2016: –€2.7m) came under pressure from KBA-Flexotecnica, which contributed a figure of –€3.1m. Optimisation efforts at the Italian subsidiary target to speed up the growth course in the future market of flexible packaging. Without the flexo activities, Digital & Web posted a clear improvement in earnings.

Despite the growth in orders for packaging printing solutions, new business in the Special segment dropped to €216.3m, down from €269.5m in the previous year, in which major security press contracts had been received. At €189.2m, segment revenue fell short of the previous year (€222.9m) due to more deliveries in H2. EBIT came to €14.6m, translating into a gratifying margin of 7.7%. The previous year’s figure of €22.1m had been influenced by a high catch-up effect of €4.9m from a large security press project.

Increase in Equity Ratio to 32.6%
Despite the higher customer prepayments, cash flows from operating activities came to –€20m compared with the previous year’s figure of –€10.6m. In addition to higher inventories for the planned revenue growth in the second half of the year this was due to the increased receivables resulting from an accumulation of deliveries shortly before the end of the first half. 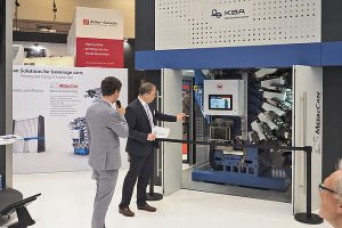 Aside from higher capital spending, the free cash flow of –€65.5m was burdened by the first payment instalments of €32.4m for the external funding of a part of the pension provisions. With its funds of €127.5m, securities of €14.7m that can be liquidated at any time as well as the high cash and guarantee facilities, Koenig & Bauer has a stable funding base. The equity ratio rose relative to the slightly increased balance sheet total to 32.6% (end of 2016: 31.1%).

The group workforce increased by 158 over the previous year to 5,359 employees as of 30 June. In addition to targeted recruiting in the service business and for new applications for the packaging and digital printing markets, 71 employees joined the group through the acquisition of KBA-Iberica Die Cutters for the growing die-cutter market.

Guidance for 2017 Confirmed
The order backlog of €620.5m at the end of the first half, expanding service business, steady demand in the packaging markets and promising customer projects in security and digital printing, the management board expects revenue growth to accelerate with a positive effect on earnings in the further course of the year. In the absence of any material deterioration in global economic and political conditions impacting its international business, group management expects to achieve organic growth of up to €1.25bn in group revenue and an EBIT margin of around 6% in 2017.

The report on the first half of the year is available as a PDF file and can be downloaded at www.kba.com/en/investor-relations/financial-reports/