The company’s cash balance was unchanged at the end of the quarter, compared with a decrease in cash of $33 million in the same period a year ago. For the six-month period ended June 30, 2016, cash used in operations improved by $74 million compared with the prior-year period.

"Kodak demonstrated improvement in our cash flow and overall balance sheet in the second quarter," notes David Bullwinkle, Kodak CFO. "We continue to be committed to generating cash in 2016."

Print Systems Division (PSD) Kodak’s largest division, had second quarter revenues of $258 million, a 9% decline compared to 2015. Operational EBITDA for the quarter was $22 million, up $2 million or 10% from the same period a year ago. On a constant currency basis, Operational EBITDA improved by 15%.

PSD’s Electrophotographic Printing Solutions (EPS) business showed comparable profitability to the prior-year period due to productivity and cost improvements, even with the anticipated slowdown in unit installations as customers paused to evaluate new products introduced at drupa.

Enterprise Inkjet Systems Division (EISD) had second quarter revenues of $19 million, down from $21 million in the same period in 2015. Operational EBITDA was $5 million, flat compared to the second quarter of 2015.

The Prosper business had continued strong performance in the second quarter. For the half year, Prosper results improved from a loss of $25 million to a loss of $16 million, including a $3 million investment related to drupa, and Prosper EBITDA improved by $8 million year over year.

Micro 3D Printing and Packaging Division (MPPD) had solid results for the quarter, driven by strong performance of the Kodak Flexcel NX Packaging business, which continues to represent a significant growth area for Kodak. Revenues for the second quarter were $35 million, compared to $33 million in the same period a year ago. Operational EBITDA declined by $2 million, primarily driven by unfavorable foreign exchange rates, investment in drupa and increased R&D expenses.

Revenues for the Flexcel NX Packaging business increased by 7%, and the company placed twelve Computer-to-Plate units in the quarter. Flexcel NX Plate volume grew at 16% year over year.

In Micro 3D Printing, Kodak continues to focus on copper mesh touch sensors and shipped products to an All-in-One OEM customer in the second quarter.

Software and Solutions Division (SSD) revenues for the second quarter were $21 million, down from $27 million in the same period last year. Operational EBITDA declined $3 million to a loss of $2 million. This division’s performance was impacted by delayed timing of government contracts in Latin America and the delayed timing of orders as a result of drupa.

Consumer and Film Division (CFD) revenues for the second quarter were $61 million, down 8% from $66 million in the same period last year. Operational EBITDA improved from $8 million to $10 million, driven primarily by a significant industrial films customer order in the quarter. Excluding the consumer inkjet business, which saw revenues drop by 39%, the division’s revenues for the quarter improved by $2 million.

Intellectual Property Solutions Division (IPSD) had Operational EBITDA of negative $4 million for the second quarter of 2016, an improvement of $2 million compared with negative $6 million for the year-ago period. This improvement reflects continued efforts to re-prioritize research programs. During the quarter, Kodak participated in the formation of a partnership focused on brand protection technology with Alibaba Group, a leader in ecommerce, and signed a contract with Carbon3D, a 3D printing technology company, which will result in improved profitability for the division. 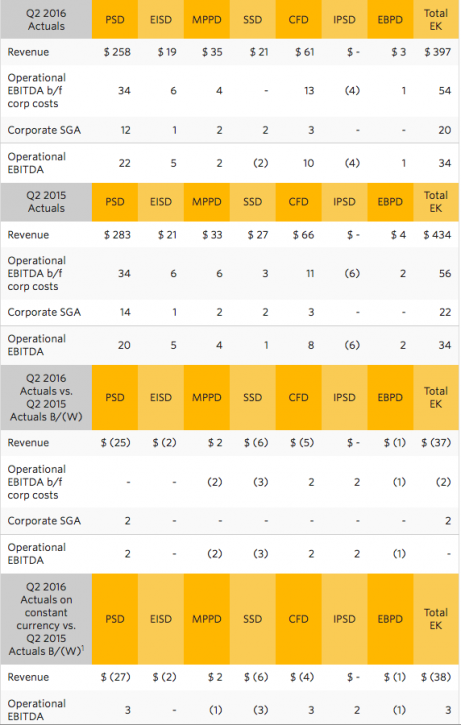 About Kodak
Kodak is a technology company focused on imaging. The company provides — directly and through partnerships with other innovative companies — hardware, software, consumables and services to customers in graphic arts, commercial print, publishing, packaging, electronic displays, entertainment and commercial films, and consumer products markets. With our world-class R&D capabilities, innovative solutions portfolio and highly trusted brand, Kodak is helping customers around the globe to sustainably grow their own businesses and enjoy their lives.