ROCHESTER, N.Y. - March 16, 2018 - Eastman Kodak has reported financial results for the fourth quarter and full year 2017, delivering net earnings for the year of $94 million on revenues of $1.5 billion and continued growth in key product areas. 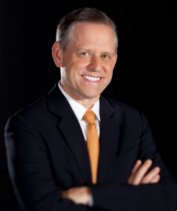 “2017 was a year of investment in our strategic growth priorities which bodes well for the future,” said Jeff Clarke, Kodak CEO. “We also eliminated several business initiatives while continuing to reduce cost and drive greater efficiency in the company. We enter 2018 with a stronger growth profile and more productive operations.”

Revenues for the full year 2017 were $1.5 billion, down 7% from 2016. The revenue decline was driven by volume and pricing declines within the company’s commercial print business and volume declines in the company’s consumer inkjet and industrial film and chemicals businesses.

“Our use of cash in 2017 included meaningful investments in the Ultrastream inkjet platform, Flexcel NX packaging, Sonora X plates, advanced materials and brand licensing which will contribute to growth,” said David Bullwinkle, Kodak CFO. “In the fourth quarter of 2017, we reprioritized our investments to focus on shorter payback periods and reduced costs which will improve our ability to generate cash in 2018 and beyond.”

Enterprise Inkjet Systems Division (EISD), including the Kodak Prosper and Kodak Versamark businesses and the investment in Ultrastream inkjet technology, had fourth-quarter revenues of $39 million, down from $43 million in the same period in 2016. Operational EBITDA was $3 million, an increase of $1 million compared with the fourth quarter of 2016.

The company continues to invest in the development of Kodak Ultrastream, the next-generation inkjet writing system, which is scheduled for launch in 2019.

Flexographic Packaging Division (FPD) includes Kodak Flexcel NX systems and plates, as well as other packaging businesses, such as analog flexographic plates and letterpress plates, proofing products and services. Revenues for Q4 were $41 million, up $7 million compared with the same period a year ago. Operational EBITDA for Q4 was $10 million, an improvement of $3 million compared with the fourth quarter of 2016.

Flexcel NX products continue to deliver strong growth. Year over year, Flexcel NX plate volume increased 13% for the quarter and 17% for the full year. The division continues to invest in new product development and infrastructure, including a total investment of $16 million to build a plate manufacturing line in Weatherford, Okla.

Consumer and Film Division (CFD) revenues for the fourth quarter were $47 million, flat compared with Q4 of 2016. Operational EBITDA declined from negative $2 million to negative $6 million.

For the year, revenues for CFD were $198 million, down from $221 million in 2016. Operational EBITDA for the division was down $32 million for the year, driven by the continued expected decline in the consumer inkjet business and higher film manufacturing costs associated with a vendor transition.

Advanced Materials and 3D (AM3D) had Operational EBITDA for the full year of negative $26 million, flat with the prior year. The division took significant cost actions in Q4 and sharpened its focus on investments in light-blocking particles, printed electronics and advanced materials. 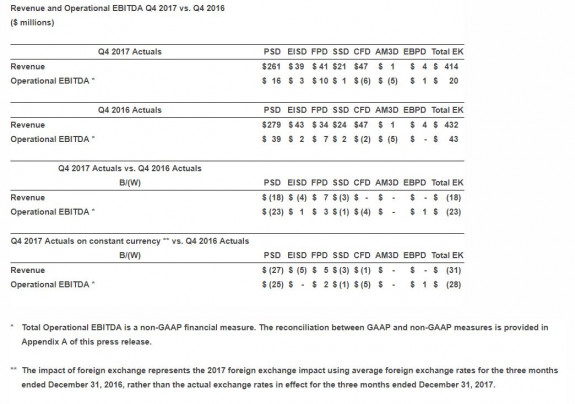 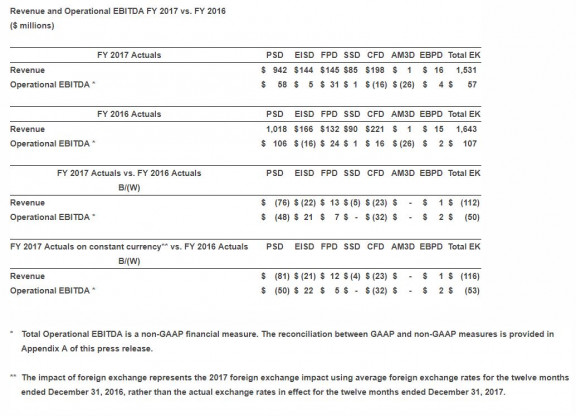