Kodak Promises to ‘Double Down on Digital’

Kodak is, acknowledges James V. Continenza, its executive chairman, a company that has “lost our way.” His mission is to put Kodak back on the path it used to follow as the printing industry’s preeminent supplier of consumables and graphic reproduction technologies. 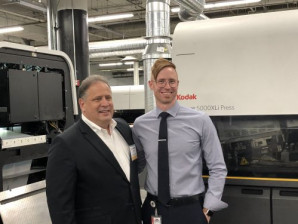 After many painful years of contraction, bankruptcy, and reorganization, Kodak will likely never again operate on the grand scale it once did. But Continenza has a plan for lifting it to leadership in digital printing, which he and other Kodak executives outlined in a briefing for media and analysts at the company’s headquarters in Rochester, N.Y., on March 5.

The briefing included a tour of one of Kodak’s top customers for its PROSPER inkjet technology: Mercury Print Productions, also based in Rochester.

“I’m a digital person. I don’t get things that are analog,” declared Continenza, appointed by Kodak to his present post at the beginning of 2019. Something he does understand is being in charge of printing companies, an ability he exercises as the current chairman of the board of both Merrill Corp. and Cenveo. “I kind of know cradle-to-grave in this space,” he observed.

A Perception to Change

Continenza said this insight convinced him that “we had to get focused” on restoring Kodak’s reputation among its customers, who were telling him that “Kodak isn’t it” despite their loyalty to its products. Kodak was perceived, he said, “as the hardest company in the world to do business with. We are so dysfunctional when it comes to the printers, and we don’t do what’s best for them.”

Continenza balanced the bluntness of these admissions with the forcefulness of his promise to do better. Under the customer-first policy now in place, he said, end-users’ needs, not Kodak’s preferences, will be the primary drivers of product marketing and sales strategies.

“We will not oversell,” he insisted. “I don’t want to shoehorn in products. We’ve got to have the proper products and the proper applications.” Should mismatches occur, he added, “there is nothing that I will not take back.”

In organizational terms, Continenza said, the company’s new “One Kodak” model does away with old divisional structures and promotes accountability by assuring that no one will be “reporting to themselves” as before. Corporate leadership has been extensively realigned, he added.

Financially, Continenza asserted, “we’re the strongest we’ve been in decades.” This was accomplished through $100 million worth of cost-cutting in one year and through the sale of assets that included Kodak’s flexographic packaging division, which was acquired by a private equity investor in April of 2019.

Continenza defended the sale, in which Kodak gave up some of its best-known graphic arts products in return for about $320 million, as a way out of indebtedness. “We wanted to de-lever,” he said. “We fixed the balance sheet. You can’t fix the business when your balance sheet is screwed up.”

David Bullwinkle, CFO, affirmed that the sale had played a large part in bringing Kodak to the improved cash position it enjoys now. Without the proceeds that the sale of the flexo assets generated, “we were looking at pretty ugly debt,” he said. 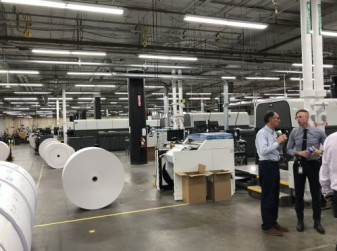 The digital press department at Mercury Print Productions has a total of six PROSPER production inkjet presses from Kodak.

Jeff Zellmer, VP of global sales and strategy, pointed to comparable improvements in Kodak’s sales organization. Printers, he said, are telling the company, “we want Kodak back. We want Kodak to win.” The formula for that started with reforming a “convoluted” sales structure that obliged customers to deal with “multiple people in multiple sales force silos” instead of giving them the “one cohesive unit” that serves them now.

“Our goal is to help our customers navigate the future of print,” Zellmer said. “We’re going to be out there shaking hands” with a U.S. sales team that triples the number of Kodak reps calling on clients. The company has consolidated seven sales regions into three and has enabled all of its salespeople to cross-sell products, he added.

“This may be a corporation, but we’ve turned it into a family business,” Continenza declared. In that spirit, he continued, “we’re doubling down on digital” by augmenting that part of the portfolio with products that are either available now or will be announced prior to drupa 2020 in June.

Among new developments on the digital side are the commercial launch of the Uteco Sapphire EVO inkjet packaging press for paper and plastic substrates, featuring Kodak’s STREAM inkjet technology. The press has a web width of 25.6˝ and runs at 150 fpm. A wider (49˝), ULTRASTREAM-powered version, the Sapphire EVO W, has been sold into the market and is expected to be shown at drupa.

“We are printing and packaging. We’re here to compete in the printing industry,” declared Continenza, adding that Kodak soon will “unleash” new patented technologies for digital products. “We’re not taking years anymore. We are going to sell our way to success.”

Past missteps won’t impede achieving that objective, he promised. “We do a good job with our customers — we just got in our own way.”

A Kodak Customer 'All the Way Through'

Mercury Print Productions may be the only printer in the country working out of a plant that used to be occupied by one of its principal suppliers.

That’s not the only example of Mercury’s affinity for Kodak, its neighbor in Rochester, N.Y. The plant, a former Kodak facility, houses no fewer than six PROSPER production inkjet presses driven by Kodak’s PRINERGY workflow. Mercury also uses Kodak’s SONORA X process-free plates for its expanding battery of litho presses.

As a result, says John Place, CEO, Kodak “touches every part of our business, all the way through.” Mercury, which installed its first PROSPER press in 2012, runs them 24/7 across various shifts and aims for 70% uptime on the equipment, Place adds.

Originally a commercial printer, Mercury branched into book production and is now a leading provider of print materials to the educational publishing market. It is equipped for everything from runs of one to orders in tens of thousands of copies, with the PROSPER inkjet presses for short-run, on-demand work and conventional presses for higher volumes.

Soon to take over at the high end is a 48-page LITHOMAN web press from manroland, now being installed. When it is fully up and running, says Place, “a publisher will never again have to move a book away from Mercury” because of gaps in run-length capacity. The company also operates six-color Heidelberg Speedmaster sheetfeds, and last year became the first U.S. printer to install a Landa S10P nanographic Inkjet press from Landa Digital Printing.