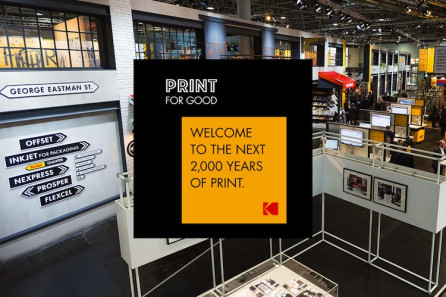 ROCHESTER, N.Y. — June 13, 2016 — Kodak today declared drupa 2016 a resounding success, having reached its sales target on day 7 and 181% of target on the final day of the show. Tens of thousands of visitors, prospects and customers from around the world visited the Kodak Quarter over the course of 11 days to do business and see the company’s latest innovations, including more than 20 new products and technologies launched at the show.

Jeff Clarke, CEO of Kodak, comments, "Kodak came to drupa 2016 to demonstrate our long-term commitment to the print, publishing and packaging industries, reflected in our Print. For Good. message. We also clearly positioned Kodak at the forefront of the industry through the strength of our new technologies to continue driving the sustainability of the markets they serve. Hitting our sales target on Day 7 was testimony of the strengths of our products and Kodak’s standing in the print industry."

Kodak also demonstrated its influence in future technologies, including 3D printing. Visitors were able to see how Kodak’s materials science enables its partner, Carbon 3D, to rapidly transform 3D models into physical objects. Kodak also highlighted the strength of its revolutionary antimicrobial material science with antimicrobial polo shirts worn by its operators for the duration of the show.

The company made daily announcements featuring prominent sales and partnerships, signaling its focus and commitment to print.

Kodak marked a significant milestone in the worldwide adoption of its industry-leading mainstream flexographic plate technology with the 500th order of a Kodak Flexcel NX System. Multidruk, a Polish flexographic prepress provider who is also expanding its services in Europe, returned to drupa 2016 to place an order for its second Flexcel NX System.

Kodak celebrated 21 years of thermal imaging technology and its 21,000th computer-to-plate (CTP) sale at drupa 2016. The company honored KARTON-PAK S.A. of Poland who chose the Kodak Magnus VLF Q2400 Platesetter with Kodak SQUARESPOT Imaging Technology to give its customers a higher level of stability, accuracy and reliability within its operations.

Kodak announced a new agreement with Caxton & CTP Publishers and Printers Limited, one of the largest printers in Africa. The order includes the installation of a Kodak Prosper S30 Imprinting System on Caxton & CTP’s existing offset litho printing presses and represents the first variable print technology on African newspapers.

These announcements took place against the backdrop of the 'Kodak Quarter.' The company created a life-sized interpretation of an urban neighborhood, complete with streets, cafes, a convenience store, a newsstand and a New York-style loft, all designed to reflect the resurgence of the iconic Kodak brand. The reaction from visitors and other key industry figures were overwhelmingly positive:

Professor Frank Romano, Rochester Institute of Technology, noted: “Kodak had the most interesting, creative, and useful booth at any trade show I have attended, and I have attended almost every major event since 1968.”

"Kodak’s Urban Renewal theme for the drupa 2016 stand has become a must-see for visitors and exhibitors, and perfectly reflects the transition that the print & publishing industry has been going through in recent years,” said Sabine Geldermann, Director of drupa. “The quality of the stand, combined with the fact Kodak has chosen to launch over 20 new products and technologies here at the show reflects their commitment to drupa and the importance of drupa as a global showcase for our industries."

“We are committed to sustainability, profitability and growth in this industry,” said Brad Kruchten, Senior Vice President, Kodak. “Our solutions that drive real value for our printers, materials science expertise, industry partnerships and strong brand recognition all helped Kodak exceed expectations at drupa 2016.”

About Kodak
Kodak is a technology company focused on imaging. It provides — directly and through partnerships with other innovative companies — hardware, software, consumables and services to customers in graphic arts, commercial print, publishing, packaging, electronic displays, entertainment and commercial films, and consumer products markets. With its world-class R&D capabilities, innovative solutions portfolio and highly trusted brand, Kodak is helping customers around the globe to# sustainably grow their own businesses and enjoy their lives.