KBA Reports Positive 2014 Financials, Largely as a Result of Its Realignment Project

WURZBURG, GERMANY—March 20, 2015—Koenig & Bauer AG (KBA) published its financial statements for 2014 on March 20. At €1.1bn group sales were at the top end of its forecast (2013: €1,099.7m). Initial positive impacts from the press manufacturer’s group realignment which began at the beginning of 2014 are visible. Compared to the previous year when restructuring expenses of over €155m strained KBA’s operating result, in 2014 both its sheetfed offset segment and the web and special press division posted an operating profit. Moreover, despite further special expenses of €10m the rise in operating profit to €14.1m was significantly higher than planned a year ago. The pre-tax profit (EBT) came to €5.5m and a group net profit of €0.3m also exceeded the forecast.

In his letter to the shareholders Claus Bolza-Schünemann, president and CEO of the nearly 200-year-old press manufacturer, said, “We made rapid progress in the first twelve months of the most extensive realignment project in our company’s recent history and were pleased to see its positive effects earlier than anticipated.”

Increase in new sheetfed orders unable to fully compensate for decline in web and special presses
Order intake in 2014 was characterized by negative external impacts resulting from numerous global conflicts, economic weakness in parts of Europe and in key emerging countries as well as slower growth in China. This is why the positive performance of the group’s sheetfed offset division was particularly pleasing as order intake here profited from KBA’s strong position in folding carton and metal decorating, and lifted slightly from €608m to €610.1m, bucking the industry trend. At the same time sluggish business trends in newspaper and publication printing continued and combined with a slide in demand for security presses led to a fall in order intake of 14.2 percent to €346.8m compared to the previous year. Overall, the rise in new orders for sheetfed presses was unable to compensate for the decline in KBA’s web and special press business. At €956.9m the total volume of new press orders was 5.5 percent down on the prior-year figure.

As part of the Fit@All restructuring program the KBA management board has already initiated all necessary measures and implemented these to a large extent: They are aimed at ending the group’s dependence on shrinking markets, such as newspaper and publication printing. KBA management expects these measures to lead to a more stable level of capacity utilization and appropriate earnings, also in these business units. At the end of the year group order backlog came to €417.3m, compared to €560.5m in 2013.

Nearly the same can be said for sales in the business segments. While sales of sheetfed offset presses were up 3.3 percent to €590.6m also a result of brisk business with metal-decorating systems, at €509.5m revenue in the web and special press segment sank by 3.5 percent. Lower sales in this segment were compensated in part by KBA-Kammann and KBA-Flexotecnica which were consolidated for the first time over the entire reporting period. Both companies deliver special presses for the packaging printing market. In addition, sales of coding systems from KBA-Metronic were up slightly. The KBA digital printing field also contributed to sales with the delivery of the first KBA RotaJET 168 to a German decorative printer.

China remains largest market despite a dip in growth
Compared to 2013 domestic sales sank by 8.3 percent to €180.6m and the export level rose from 82.1 percent to 83.6 percent accordingly. Deliveries to other parts of Europe increased by 17.8 percent to €389.8m and this region’s proportion of group sales climbed from 30.1 percent to 35.5 percent. Sales generated in North America stood at €117.6m or 10.7 percent of the total, compared to 12.8 percent the year before. At 13.5 percent Latin America and Africa’s contribution was slightly higher than usual. Given a slide in growth in China and economic weakness in Thailand, sales attributable to Asia and the Pacific eased down from €301m in 2013 to €263.4m, or 27.4 percent to 23.9 percent. Nevertheless, China remained KBA’s largest single market.

€11.5m operating profit in sheetfed segment…
Following a considerable operating loss the previous year due to high restructuring expenses and impairments (2013: –€77.6m), the sheetfed offset segment generated an operating profit of €11.5m in 2014. Along with major progress with costs and prices at the site in Radebeul and at KBA-Grafitec, brisk business recorded by KBA-MetalPrint in Stuttgart also contributed to this profit. KBA CEO and president referred to this division’s development in earnings as particularly encouraging for the future.

In 2014 KBA bucked the industry trend by posting a slight increase in order intake and sales in its sheetfed offset press division.

…and €2.6m operating profit for web and special presses
At €2.6m operating profit after special items in the web and special press segment remained below previous years. However, in light of the high one-off effects in 2013, the prior-year loss of €53.1m is not comparable. Besides the planned special expenses for relocations and other structural measures, insufficient utilization of capacities which have been significantly reduced in the meantime at the company’s web offset plants resulted in substantial costs. KBA’s web offset business will have brighter future prospects albeit on a significantly smaller scale through its grouping with growing inkjet digital activities in the new KBA-Digital & Web Solutions business unit.

Strong cash flow despite high severance payments
At €43.2m cash flows from operating activities exceeded the previous year’s figure of €34.1m significantly in spite of a fall in customer prepayments and considerable cash outflows for severance payments. After deducting funds for investments, the free cash flow soared to €28.7m compared to €3.2m the year before. Along with an improvement in earnings, this was achieved by a reduction in inventories and receivables. The group’s CFO, Dr Mathias Dähn, in office since June 2014 put working capital management at the top of his agenda.

Over €200m liquid assets at the end of 2014
At 31 December 2014 liquid assets rose to €207.6m thanks to KBA’s positive cash flow. After deducting €15.2m in reduced bank loans, net liquidity came to €192.4m. From the credit lines available, only guarantee credit lines were used to secure customer prepayments. A decrease in the discount rate for German pensions reduced the equity ratio from 25.3 percent to 22.4 percent. Nevertheless, KBA still has a very solid financial footing compared to other companies in the industry.

678 fewer employees than twelve months earlier
At the end of 2014 there were 5,731 staff on the KBA payroll, 678 fewer than at the end of 2013. Excluding apprentices, trainees and those who have already left the company the number of employees in the group sank to 5,114. Payroll will fall again to about 4,500 by the end of 2016 due to restructuring. KBA’s training rate remained above average at 7.4 percent.

New company structure in preparation
As part of the realignment the KBA management board is preparing the shift from a functional to a divisional organisation structure to strengthen the group’s Corporate Governance system. The fundamental goals are increased transparency, clear management responsibility and targets in all business units, no tolerance for loss-makers, no cross-subsidies as well as capital expenditure according to strategic objectives and projected returns. The new structure will be submitted to the AGM on 21 May 2015 and could be implemented with effect from 1 January upon approval retrospectively.

In the new company structure Koenig & Bauer AG will operate as a holding with central functions. The operating business units sheetfed offset (KBA-Sheetfed Solutions), digital & web (KBA-Digital & Web Solutions) as well as production (KBA-Industrial Solutions) which will act as a joint production base for the group, will all be managed under its roof. The spun-off companies have a German legal company structure of an AG & Co. KG (limited partnership with public limited company as general partner). KBA-NotaSys, responsible for our security printing systems, will be adapted in accordance with the added-value chain and will be consolidated in the new special press unit, just like KBA-MetalPrint, KBA-MePrint, KBA-Metronic, KBA-Kammann and KBA-Flexotecnica.

The group’s new reporting structure for the sheetfed, digital & web and special press segments planned for 2015 is expected to contribute to strengthening transparency further. 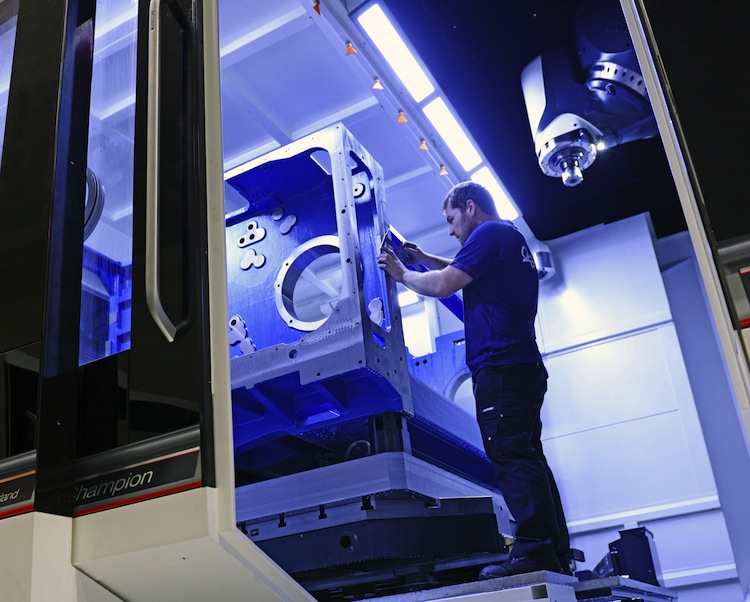 Outlook 2015: Similar sales with up to 2 percent EBT margin
KBA sees no overall growth for the global press market in 2015 given the raft of imponderables impacting on the global economy. However, the group’s management board perceive further opportunities for growth predominantly in digital and packaging printing. In digital printing KBA aims to focus more on applications with challenging materials and large substrate widths. Flexible digital press platforms were developed in 2014 with the RotaJET L and RotaJET VL. Furthermore, the first results are expected from KBA’s partnership with Hewlett Packard (HP) for the development of an inkjet press for the digital corrugated printing sector.

The KBA group already has a strong footing in the growing packaging market and is the leader in printing systems for board, metal and glass. In 2015 the company aims to push forward intensely with the integration of KBA-Flexotecnica active in the market for flexible packaging. KBA-Kammann specialising in systems for the decoration of premium hollow containers has formed a partnership with KBA-MePrint to develop a new press for printing high-quality labels. Coding-system specialist KBA-Metronic is seeking to grow further in Asia. Additionally, the group intends to increase its profitable service and trading sales.

The KBA management does not anticipate any significant special expenses in the group financial statements for 2015 as the restructuring program will be largely complete by then. In contrast, cost-saving effects from measures that have already been implemented will have an increasingly positive impact on earnings and liquidity available. Assuming the general economic environment remains relatively stable, KBA management is targeting over €1bn in group sales for 2015 and anticipates an improvement in earnings to an EBT margin of up to 2 percent of sales.

In view of the volatile economic and political climate, KBA management believes more detailed forecasts for the new fiscal year and beyond would entail too many unknown factors at present to be of any merit.

Figures at a glance

The financial statements can be downloaded as a PDF file from here...