WÜRZBURG, Germany — November 10, 2016 — Following a good third quarter, the Koenig & Bauer Group (KBA) came substantially closer to achieving its growth targets for revenue and earnings for 2016. At €869.8m at the end of the first nine months, the group order intake was 1.2% higher than in the strong previous year. New orders exceeded group revenue, which rose by 22.3% to €831.4m, by more than €38m. The order backlog was valued at €613.3m at the end of September, up 2.7% on the previous year, and is sufficient to ensure the capacity utilization of the group’s plants until spring 2017. 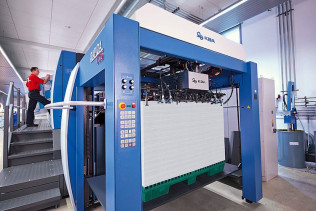 In the first nine months of 2016, KBA-Sheetfed achieved a 17.5% increase in revenue to €443.8m, accompanied by very strong segment earnings of €17.3m. Large-format Rapida presses for printing folding cartons made a significant contribution to this performance.

KBA President and CEO Claus Bolza-Schünemann states, “With underlying economic and political conditions still challenging, our heightened focus on the growth markets of packaging and digital printing as well as service business is paying off. Even more encouraging than the substantial revenue growth is the sizeable increase in earnings for the period under review underpinned by the high profit generated in the third quarter. With operating earnings (EBIT) of €39.2m and earnings before taxes (EBT) of €34.9m, we were able to substantially outperform the first nine months of the previous year (EBIT of €6.1m and EBT of €2.1m). All segments contributed to this performance with positive figures for the quarter and the first nine months.”

The increased profit generated by the Sheetfed segment particularly strengthened the group’s earnings. The Digital & Web segment also made a positive contribution to earnings in the first nine months. The group’s gross profit margin widened from 26.6% in the previous year to 30.4%. Group net profit after tax came to €32.5m (2015: €2.4m), equivalent to earnings per share of €1.98 (2015: €0.16).

Improved cash flow and good net liquidity
Inventories rose temporarily by €69.6m ahead of the busy fourth quarter. Despite the increased working capital, cash flows from operating activities improved to –€5m (2015: –€28.6m) thanks to the substantial earnings. The free cash flow came to –€17m, compared with –€27.8m twelve months ago. At the end of September 2016, funds stood at €158.9m. Adjusted for bank loans, which were reduced to €11.4m, net liquidity equals €147.5m. The reduction in the discount rate for domestic pensions from 2.4% to 1.3% reduced equity by €33.3m. Despite the group profit, equity rose only slightly from €258.4m to €261.8m. This is equivalent to an equity ratio of 25.8%.

Positive performance in all three segments
Against the backdrop of the economic slowdown in China and other export markets, the order intake of €429.8m in the Sheetfed segment fell short of the previous year’s high figure (€516.4m) in line with expectations. New printing press business was also dampened by workload-driven longer lead times and the necessary price discipline. On the other hand, revenue rose by 17.5% over 2015 to €443.8m. At €268.9m at the end of September, the order backlog ensures good capacity utilisation for the sheetfed offset production facilities until well into the first quarter of 2017. Despite the Drupa costs and development expense in connection with a digital sheetfed press, segment profit rose to €17.3m (2015: €10.1m). Order intake in the Digital & Web segment grew by 11.2% to €100m thanks to a number of orders for web offset presses as well as further orders from HP for the inkjet web press assembled at the site in Würzburg. Revenue climbed by 74.6 % to €110m. At €60.3m, the order backlog remained at a satisfactory level. Despite the development expenses EBIT came to +€0.6m (2015: –€12.2m), thus achieving the targeted profit already at the end of the first nine months. 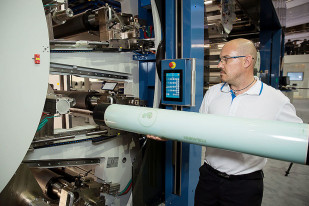 In the growing market for flexible packaging, KBA-Flexotecnica received substantially more new orders for its CI flexo-printing presses in 2016 than in 2015.

High export level and slight increase in group payroll
At 85.2%, the export level remained at the previous year’s high level, with Europe excluding Germany contributing 30.5%, North America 14%, Asia/Pacific 29.2% and Latin America and Africa 11.5% to group revenue. At the end of September 2016, the KBA Group had 5,332 employees, 47 more than in the previous year. The higher headcount is due to the consolidation of the Spanish flatbed diecutter manufacturer Iberica AG S.A. (58 employees) acquired at the beginning of July 2016. Excluding apprentices, trainees, employees exempted from their duties and staff on phased retirement schemes, the workforce dropped to 4,808.

Optimism in a challenging market environment
Like the entire German mechanical engineering industry, KBA is feeling the effects of the damper being placed on the global economy by international conflicts, economic and financial problems and political uncertainty. However, on the strength of the group’s favorable business performance in the first nine months and the high capacity utilization that is secured until well into spring 2017, the Executive Board has raised its full-year earnings guidance for 2016, which had previously already been corrected upwards in the first half-year report, at the end of the first nine months again. With group revenue expected to be between €1.1 and €1.2bn, management now projects an EBT margin of up to 5%.

Figures at a glance

The financial statements can be downloaded as a PDF file here.