DALLAS — April 13, 2016 — KBA showcases an advancement of the Rapida 75 in half format with the unveiling of the Rapida 75 PRO at drupa. This new press closes the gap to the highly automated Rapida 76. The Rapida 75 PRO features the same hard- and software solutions as medium-format Rapidas, and thus offers a raft of extra features and improved user-friendliness.

The Rapida 75 PRO moves even closer to the Rapida 105 and Rapida 106 in terms of its press design. The ErgoTronic console is a standard feature equipped with the TouchTronic graphical user interface. Job management (console) and press operation (delivery screen) are no longer separate. 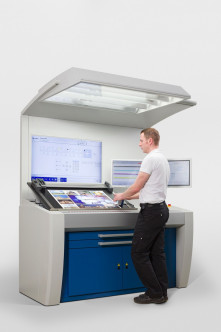 The ErgoTronic console with TouchTronic GUI is standard, the wall screen shown in the background is optional.

New: TouchTronic GUI
The Rapida 75 PRO is operated via touchscreen. All of the press’ functions are controlled with a maximum of two touches of a button. The optional wall screen is also a new feature. It displays all press settings ranging from live pictures of the sheet travel up to monitoring print quality with QualiTronic ColorControl.

New: One-Button-Job-Change
Makeready times can be cut by up to 50 per cent with One-Button-Job-Change. All pre-selected makeready processes are carried out at the touch of a button in an optimised sequence according to time. Job and press settings can be loaded at the ErgoTronic console during production. This program for job changing makes operating the press easier and reduces makeready times further. Intuitive graphical user interfaces contribute to fast job preparation. Here are the most important functions at a glance:

New: More performance
Moreover, the Rapida 75 PRO has different performance data. Its standard print format has grown to 520x735mm (20.4x28.9˝) (previously 510x735mm/ 20x28.9˝). Presses with up to eight inking units and coater produce at speeds of up to 15,00sph (previously 13,000sph) as standard. The high-speed package with speeds of up to 16,000sph remains the same, as do the special formats which deliver up to six pages in typical catalogue or U.S. measurements.

The press configurations available extend up to ten-color presses with an additional coater. Perfecting and coaters are also possible, e.g. for four-over-four or five-over-five production. They run at maximum speeds of up to 13,000sph. Double-coater presses are also available as an option. 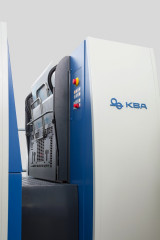 New: ColorTronic Ink Ducts
The ColorTronic ink ducts found in the Rapida 75 PRO are identical to those found in medium- and large-format Rapidas. Just like the other Rapidas, the ink keys are 30mm wide (1.18˝) and there are now 25 keys. Idle inking units can be uncoupled at the ErgoTronic console as an option. This means that the protective paste which prevents the rollers from running dry is not necessary and the inking unit does not need to be cleaned when used again. Distribution adjustment can also take place at the console.

Many well-known features have stayed. These include a wide range of drying systems ranging from the energy-saving VariDryBLUE dryers up to HR-UV and LED-UV curing systems facilitating the immediate finishing of printed sheets. Key economical features of the Rapida 75 have also been adopted by the Rapida 75 PRO in terms of the space and energy needed. It requires a lot less space than other presses in its format class and operates with a lot less energy.