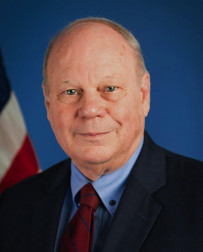 WASHINGTON - November 2, 2017 - Deputy Director Jim Bradley becomes Acting Director for the U.S. Government Publishing Office (GPO).  Bradley assumes his new role effective immediately, following the departure of GPO Director of Davita Vance-Cooks. He will serve as acting CEO of the agency and lead GPO’s 1,700 employees in carrying out the agency’s mission of Keeping America Informed through the GPO’s programs and services.

Click here to read the press release that was issued yesterday on Davita Vance-Cooks departure from the GPO.

“I am honored to serve as Acting Director and look forward to leading GPO’s employees in the important work this agency does for Congress, federal agencies, and the public every day,” said Bradley. “It was a privilege to work for Davita Vance-Cooks in modernizing GPO over the past five years, and the program of digital transformation she championed will continue.”

Bradley is a seasoned federal executive with more than 40 years of experience in congressional and agency publishing programs and Federal information policy.  Following service with the Internal Revenue Service and as printing officer for the Energy Department, Jim was a professional staff member for more than 13 years with the Joint Committee on Printing, reporting to a succession of Committee chairs from both the House and  Senate sides.

Since joining the GPO in 1996, he has overseen the production in digital and print formats of all congressional documents, including the daily Congressional Record, congressional bills, reports, hearings, and other congressional information products, as well as the daily Federal Register and the Code of Federal Regulations, the annual Budget of the United States, the Public Papers of the Presidents, and related documents. Additionally, he has been responsible for GPO’s customer service program to federal agencies, involving the competitive procurement of agency publications and information products from thousands of private sector firms nationwide.  In overseeing these programs, Bradley has worked closely with GPO’s Federal Depository Library Program to ensure the availability of congressional and agency publications for public access nationwide.  He was also involved in the introduction of the U.S. ePassport for the State Department, and for the past several years has overseen its production at GPO as well as the production and issuance of secure federal credentials containing digital components for federal entities.

In carrying out this work, Bradley has been deeply involved in GPO’s digital transformation, overseeing technology modernization efforts to improve the range of GPO products and services produced with or featuring digital technologies, and helping to guide the transition of GPO’s staff and infrastructure to an increasingly digital platform. Bradley has also led the conversion of GPO’s physical plant to accommodate units of the Architect of the Capitol, the Capitol Police, the Senate Sergeant at Arms, the U.S. Commission on International Religious Freedom, and most recently the Office of the Federal Register and the Office of Government Information Services.  He is currently overseeing the construction of new space to house the congressional legislative archives of the National Archives and Records Administration within GPO’s complex.