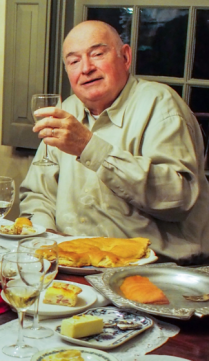 A mass and celebration of life were held today in Mystic, Conn., for Gerald "Jerry" Clark, who passed away April 17th at age 79 of a rare heart condition. Guests were instructed to dress for the memorial how Jerry lived his life — colorfully.

The event marked the final chapter for a 50+-year printing industry stalwart. As anyone who knew Jerry — as I had that pleasure during the course of several years — he was a gregarious, good-natured, but highly effective salesperson, who was also a hopeless romantic and a connoisseur of the finer things in life, including a love for good French wines and vacationing in the south of France with his family.

Jerry was born in Brooklyn, N.Y., and spent his childhood in Twinsburg, Ohio, where he cultivated his Midwest charm and ability to connect with people in an earnest and meaningful way. He spent his first semester at Ohio State University, before transferring to Baldwin Wallace, according to his obituary.

Immediately following graduation, Jerry found his true calling — in the printing industry. A self-proclaimed “road warrior,” his industry career required him and his family to relocate to numerous cities, both in the U.S. and abroad. Jerry would eventually settle his family in Mystic, where he would spend the last 25 years of his life, though he would never give up his dream of one day having a small pied-à-terre in Provence, France.

Jerry first started selling Harris Corp. sheetfed presses in his home state of Ohio, where he enjoyed a successful sales career while also attending night school to obtain an MBA from Fairleigh Dickinson University in 1970. Jerry then transferred into the Harris web division in the late 1970s, where he assumed the role of international sales manager for the Commercial Press Div., which was the key division that manufactured eight-page M110, M90 and M100L web offset presses.

"Jerry was my first industry mentor when I was hired by the Harris Commercial Press Div. after graduation from Cal Poly in 1980," points out Ray Hartman, who was very helpful to me in gathering timeline information about Jerry's industry career. "He was always very supportive of sponsoring young people entering the printing industry and offered excellent advice on how to develop those 'customers for life' achievements.

"He made friends everywhere in the industry with his quest for commercial printing and his love of fine food and wine," Hartman adds. "Jerry truly was 'The Maven' who everyone enjoyed dining with, regardless of the country that he visited."

Jerry was later hired away from Harris Graphics to join Manroland USA as the VP of sales in North America. Following his appointment, Jerry developed a core team of professional salespeople and led the effort to directly challenge AM International/Harris Graphics. As Hartman recalls, Jerry was welcomed by all of the top 10 U.S. commercial printers at that time who specialized in high-end annual reports and color-critical automotive catalogs. Jerry also won many tough sales battles with Manroland's Rotoman-N 16-page heatset web offset presses competing against Harris Graphics' established press lineup, according to Hartman.

Near the end of his career, Jerry was employed by Graphic Microsystems (GMI), where he maintained strategic account responsibilities across North America. Just as he was in selling presses, Jerry was very successful selling GMI's closed-loop color press control systems.

In recognition of his industry achievements and longevity, Jerry was inducted into the Printing Industries of America (PIA) Web Offset Society in the early 2000s and into the PIA Ben Franklin Honor Society in 2007. 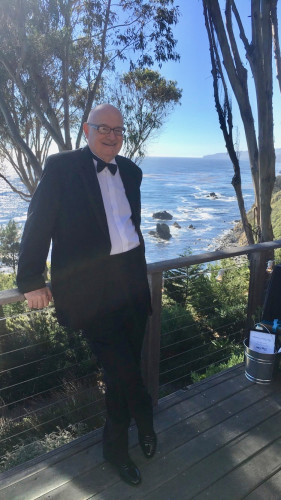 Jerry Clark knew how to strike the perfect balance between enjoying work, family, friends, and good food and wine.

As the quintessential “Renaissance man,” Jerry could seamlessly transition from the Brooklyn Dodgers to jazz, or the merits of a Bourgogne vs. a Russian River Valley Pinot, to Cleveland Browns quarterbacks of the 1960s. He had a remarkable ability to connect and communicate with people of all walks and of all ages — a trait that would serve him well throughout his career in printing sales.

Jerry also had a way with words, both on paper and in person. He lived to tell stories about things he was passionate about and, in retirement, found an outlet for some of his wine musings in the form of online blogging for Provence Wine Zine, his obituary revealed. When he wasn’t writing about wine, he was drinking it and reading about it; watching old, foreign, or typically more obscure films; using his vast collection of rubber stamps to write handmade cards to family and friends; and taking great pleasure in his daily rituals of buying groceries for his wife and enjoying a buttered bagel with his newspaper.

Though he had many hobbies and passions, Jerry prized family above all else. He had two children from his first marriage to Germaine Clark, followed by two daughters with his current wife, Benedicte Clark. He was fond of saying they kept him young; in truth, they say that he was usually the one to outpace them.

As noted by Jerry's family in his obituary, "Anyone who spent a night with him knew it could end with a 5 a.m. diner stop, at a hole-in-the wall jazz club, or down the side of a ravine with a few cracked ribs; he gave new definition to the expression FOMO (Fear of Missing Out)." As such, Jerry was one-of-a-kind gentleman who will be missed by many.

As Hartman told me during a phone call while praising Jerry Clark's noble and good-natured personality, "Old gentlemen printers never fade away; they will always leave a lasting impression." Oh, how so very true.