Innovation on Display at Launch of OnsetX HS Series 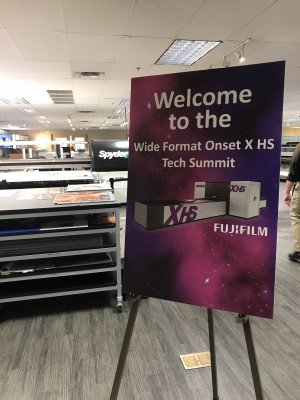 Innovation was the theme last week in Hanover Park, Ill., when Fujifilm hosted a VIP group of customers for a special Wide-Format Inkjet Tech Summit in Itasca, Ill., and in its Hanover Park-based Americas Technology Center (ATC). During the event, attendees also had the opportunity to delve into Fujifilm’s history of innovation and see a demonstration of the newly released Inca OnsetX HS.

“Printing is a mature business,” said Moncrief, “and part of the challenge printers have right now is how to redefine themselves.”

Referencing a recent study from I.T. Strategies, “Accelerators for Digital Print” (September 2018), Moncrief pointed to data showing the industries with the most projected job losses in the U.S. from 2016-2026. Two of the top five industries were in print-related markets: newspapers, periodicals, books, and directory publishers; and printing and related support activities. “If you let yourself be put into this box, it can be a bleak outlook,” he commented.

Likewise, on the ad spend front, according to Warc’s “Global Ad Spending Growth Forecast” which was published on Marketing Charts in March 2019, print advertising is forecast to decline 9.5%. One bright spot, however, is the out-of-home market, which is forecast to increase 2.3% in 2019.

Additionally, different skills are going to be required as the years march on and print providers look to streamline their businesses and build new revenue streams. According to Marco Boer and a recent I.T. Strategies report, “The 2019 Inkjet Market & Opportunity” released in May 2019,” printing skills in prepress, printing, and finishing are on the decline. More emphasis will be placed on “higher-value labor” for order entry and data management positions, including those with programming and coding backgrounds.

“With fewer workers entering the job market and with competitive pressure from companies, such as Amazon, driving up the minimum wage in certain regions, printing companies could be seeing $25 per hour print labor by 2025,” said Moncrief, referencing Boer’s data. “We need to think automation.”

Turning his attention to the retail market, Moncrief commented that change is on the horizon for the retail market and PSPs who cater to this market need to keep their finger on retail’s pulse.

On a macro level, retail stores across the country are continuing to close. An article on CNN on April 16, reported that there were already 6,000 store closures in the U.S in the first part of the year. That number has already topped the number of store closures for all of 2018. It’s no surprise that the Bureau of Labor Statistics is also reporting that the industry segment losing the most amount of jobs is the retail market segment. According to a report from March 2019, 11,700 jobs were lost in retail.

Additionally, digital signage will start to take up more and more space that had traditionally been in print’s purview. Digital signage shelf talkers are already in some grocery stores. Kohl’s has even been testing a store that contains all digital signage, according to Moncrief. While it was “a bad experience” because the digital signage was all small and monochrome, it shows that retails are looking to move in this direction and PSPs need to be prepared to offer it, especially because the barriers of entry into digital signage are declining. If one PSP doesn’t offer digital signage to retailers, someone else probably will.

Moncrief continued his presentation with a look at Fujifilm and its commitment to the industry and its customers in both offset and digital environments. Started in 1930, Fujifilm has deep roots in the industry and offers more than 22,000 SKUs in its full portfolio. “We are in it for the long term,” says Moncrief. “We need to continue to support legacy processes, but we are also deeply committed to supporting and growing business. Sometimes I think we are the best kept secret in the industry.”

The following morning, Thursday, June 13, Don Piggot, manager of the ATC, Fujifilm North America, welcomed the VIP group to the ATC before the group moved into the facility for its first look at the new Inca Onset X3 HS running two-pass mode. 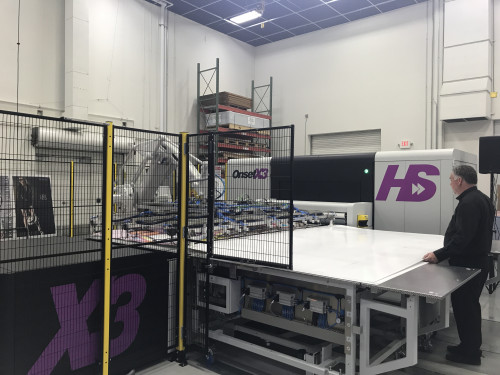 In the Fujfilm Americas Technology Center, Inca's Onset X3 HS was demonstrated to a group of VIP customers.

The OnsetX HS launch was partnered with a new Fujifilm inkjet range, Uvijet OX. The ink features a new patented ink technology developed and manufactured at Fujifilm Specialty Ink Systems in the U.K., designed specifically for the Onset family of printers to achieve exceptional adhesion on rigid plastic media, specifically those commonly used in North America, at the highest speeds.

The addition of the new “single cycle” print mode to the OnsetX HS, made possible by the optimization of the print jetting profiles and jetting frequencies, means the new HS range can print at speeds up to 15,597 sq. ft./hr. — more than 50% higher than previously published throughput figures. The bonding properties of the new Uvijet OX ink also ensure maximum adhesion to a much wider range of media, even at these higher printing speeds. 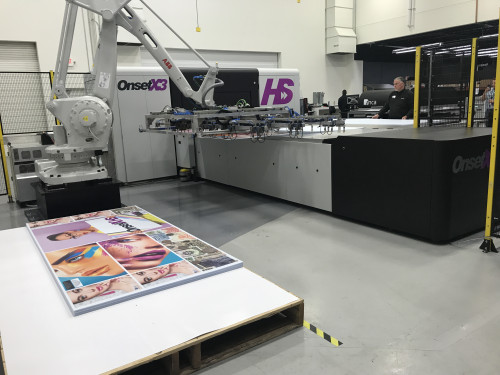 Machine downtime caused by job changes and set-up routines has also been dramatically reduced with the integration of a range of new automated features on the HS machines. On- and off-loading systems, UV shutter alignment, and table skin adjustments have all been automated, reducing operator intervention and bringing job set-up time down from an average of 15 minutes to around 30 seconds.

Together, the OnsetX HS and Uvijet OX inks open up a new range of applications and possibilities in markets where the demand is growing for shorter run but the highest quality printing on corrugated board, packaging, and non-PVC rigid plastics.

The new OnsetX HS series is available now and distributed exclusively in North America by Fujifilm.