“Anything commercial” is what Tom Bennett, production manager at Premier Printing (Winnipeg, Manitoba), says this 55-year-old lithographic business is prepared to produce. But, as customers grew more insistent in their demands for faster delivery, it became clear that even the high running speeds of the shop’s Heidelberg long perfectors weren’t enough to shorten turnaround times. The bottleneck was sheet drying. The innovation that broke the bottleneck and transformed the pressroom was in-line LED-UV curing.

Bennett says that the company asked AMS Spectral UV to install XP Series LED-UV curing systems ahead of the perfecting unit and in the delivery of two sheetfed offset presses — a 10-color Heidelberg Speedmaster XL 105 and an eight-color Speedmaster SM 74. With drying taking place instantly on both sides of the sheet, the tempo of production changed dramatically.

Stocks with hard-to-dry finishes like matte and silk no longer needed to sit for up to 48 hours before being sent to postpress. Now, says Bennett, everything coming off the Speedmasters “moves to the folder almost immediately” because the curing units can dry the ink as rapidly as the presses can lay it down.

This means that if it has to, the shop can print, bind and deliver saddle-stitched books within a day of getting approval. But the dividend is in more than just increased speed of throughput. Bennett says that what used to be “an absolute sea” of skids of wet paper clogging the pressroom has vanished. There is no more “work in progress” — just a string of jobs proceeding swiftly, one after another, to completion. As Bennett puts it, the pressroom floor is now so wide open that “it looks like we’re not doing anything.” 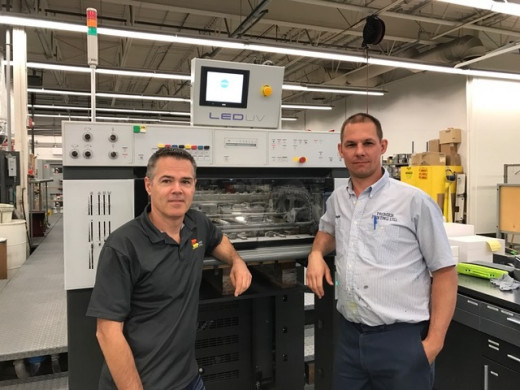 Besides the satisfaction of getting their work done faster, customers also like the improved color fidelity and rub resistance that UV curing provides. Bennett says that although LED-UV inks are expensive, the shop has found ways to avoid passing along the added cost to its clients.

At Premier Printing, LED-UV curing has proven to be the proverbial gift that keeps on giving. The company realized that with the LED-UV systems replacing conventional drying, there would be no more offset spray powder in the air — and no reason not to move the platesetter into the pressroom, where plate logistics would be greatly improved as a result.

This was done, Bennett says, over the vociferous objections of the CTP device’s manufacturer. But, the unit has been at work press-side without problems for more than a year. In keeping with Premier Printing’s commitment to Lean manufacturing, the press crews double as platemaker operators.