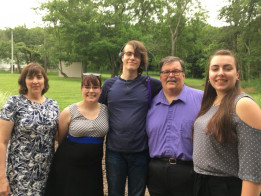 Nick Stratigos is survived by his wife Cindy and his children Melina, Lizzy, and Erik.

I am deeply saddened to share that our friend and colleague Nick Stratigos passed away in his sleep on Aug. 27 after a brief and courageous battle with cancer. He was only 60 years old. Our heartfelt condolences are extended to his widow Cindy and his children Melina, Lizzy and Erik.

Nick was a lifelong and proud Pittsburgher and one of the staunchest Penguins fans you could ever meet. He attended Duquesne University where he obtained a Bachelor’s of Science and Carnegie Mellon University where he earned a Masters in Finance. He was also a Certified Association Executive (CAE).

Nick began his career as a business manager with his alma matter, Carnegie Mellon. He transitioned to association work in 1994 and held senior finance positions with the Iron and Steel Society, the Pittsburgh Technology Council, Printing Industries of America and most recently PRINTING United Alliance. He was a past Chairman of the Pittsburgh Society of Association Executives.

Besides his love for hockey and other sports, Nick enjoyed dabbling in the theatre with his children and also did voice actor work. He was the proud announcer for the annual Miracle League All-Star Game. He also was an extraordinary stock market investor and led an investing club. He addition to teaching investing, he prided himself on beating the S&P 500 12 of the last 15 years!

Above all else, Nick was a devoted family man and, in the end, he was surrounded by those he loved most.