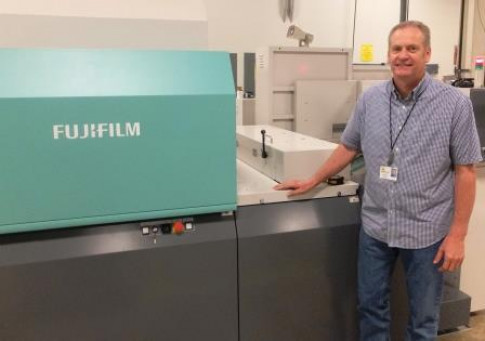 Independent Printing first opened its doors in 1935, with a staff of two, operating out of a basement. And now, over 80 years later, there is a team of 250 skilled individuals working at this highly regarded, award-winning print and communications firm, providing services in fulfillment, greeting cards, and presentation solutions. Recently, Independent acquired Hayes Graphics, an established digital and wide format print provider to further grow and diversify its portfolio of solutions.

Independent prides itself on delivering the highest quality print possible, and the J Press 720S is designed not only to produce exceptional quality, but also the versatility, productivity and efficiency the company demands. The high-quality, sheetfed inkjet press offers a half-size solution for print runs of just one or thousands, providing an efficient alternative to traditional offset and a superior solution for shorter run jobs requiring fast turnaround.

“We have a strong 20-plus year relationship with Fujifilm, and that opened the door to buying the J Press 720S,” explains Brian Tilot, VP of manufacturing, Independent. “Fujifilm always provides us with a solid quality product and fast responsive service. When we started doing our testing, we felt that with respect to our presentation folder work, the J Press 720S would be the perfect press.”

With a 29.5x 20.9˝ sheet and an output of 2,700 sph, the J Press 720S is an ideal solution for printers like Independent looking for a product that features the quality and robustness of an offset press, and the versatility to handle even the shortest of press runs.

“Our run lengths are getting shorter and shorter. It’s all about the make readies and waste, and the J Press 720S eliminates that,” comments Tilot. And because the J Press 720S uses an in-line primer, it runs many coated and uncoated standard offset stocks. “There is no need for specialty stocks, so there’s no need to change the way we buy paper,” adds Tilot. “It’s a solid machine, the color consistency is great, and it aligns with our focus to provide high-quality printing.”

Tilot is excited to be able to promote small quantities to clients now, with or without variable data at a much more economical per piece price. A recent job on their offset press called for 100 sheets. Independent had to use 350 sheets of makeready, taking the job to 450 sheets total. He appreciates knowing the J Press 720S does not require the extra and costly make ready waste, as well as the labor required to set up a job on a conventional press.

Turnaround time can also be very tight for many jobs at Independent. Tilot detailed a last-minute rush job that came in at 11 a.m., was produced on the J Press 720S, and was out the door by 2 p.m. the very same day. Not only has the J Press 720S helped Independent meet some incredibly tight time demands, this press has saved its customers freight charges by eliminating the need for overnight deliveries.

“A large number of jobs are runs of 2,000 or under,” adds Tilot. “The J Press 720S allows us to be more efficient, while remaining profitable. We expect to save over a million sheets of paper annually with our J Press 720S.”

Tilot is aware most other digital equipment in the marketplace requires a lot of maintenance, and that’s one important reason that the J Press 720S stands out from the crowd.

In operation for just three months, Tilot is excited with how rapidly the marketplace is embracing this new technology.

Fujifilm Holdings, Tokyo, Japan brings continuous innovation and leading-edge products to a broad spectrum of industries, including: healthcare, with medical systems, pharmaceuticals and cosmetics; graphic systems; highly functional materials, such as flat panel display materials; optical devices, such as broadcast and cinema lenses; digital imaging; and document products. These are based on a vast portfolio of chemical, mechanical, optical, electronic, software and production technologies.  In the year ended March 31, 2015, the company had global revenues of $20.8 billion, at an exchange rate of 120 yen to the dollar. Fujifilm is committed to environmental stewardship and good corporate citizenship.