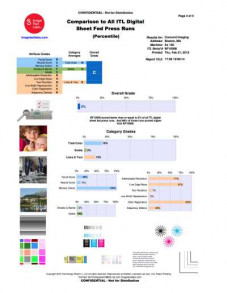 SPRINGFIELD, Va. — February 8, 2017 — Image Test Labs (ITL), a division of Technology Watch, LLC announces that it has launched SmartBuy, a unique printing press procurement resource for both digital and analog print providers. SmartBuy leverages the largest database of graded images in the world and, with a patented head-to-head comparison process, determines how new or used equipment will perform along with other presses on a plant floor.

For the past two years, ITL has been running its primary offering, the ImageGrader product, on press systems throughout the world measuring the acceptability of the image quality of test prints. Most of the company's clients are press manufacturers who use ITL technology to fine-tune and improve their press technology while it is under development. These manufacturers sell their presses to a wide range of print providers, large and small, who use a variety of hardware to serve a wide spectrum of print customers.

ITL has made independent assessments based on measurements and analysis of a large body of consistent data gathered from hundreds of presses and production sites over the past several years. “We have observed that ITL services are more and more frequently used for acceptance testing and as a reference of performance for comparison over time,” says Henry B. Freedman, founding partner of ITL. This led to the development of the ITL SmartBuy for presses.

"We realized that this service could also offer print providers a new way to see the many benefits of access to ITL data. We can compare their press’s imagery to many others throughout the world. In fact, our services are unique in that we have the largest global database of digital printers and presses against which to compare results," adds Freedman. "With our new service, ITL SmartBuy, a print provider can select a press in the marketplace and see how it performs compared to the provider’s current equipment. We are vendor neutral, so print providers get an unbiased, objective idea of how a new press will function on their production floors. Our service includes a live briefing for the customer to explain the test results and what the report really means."

Priced at $994 — a fraction of the cost of a press — ITL SmartBuy is an affordable, independent service that is not vendor-sponsored. It will work for both digital and offset presses of all forms.

ITL SmartBuy service consists of four test files run during the process of selecting a press (new or used), when accepting a press once delivered, and during the first months of use. Running the files at these different times serves to evaluate the press and verify that it is maintaining proper print quality. ITL teams up with the press provider to assure the press delivers for the customer. The ITL process actually accelerates vendor remedy to the press.

"We usually purchase new machines," remarks Ken Chaletzky, President & CEO, Copy General Corp. "We see great value in using the ITL SmartBuy service before investing in future equipment. This is the first tool I’ve seen that provides a really objective report on a specific press. It gives us a level of expectation. For people who want to see how their presses will perform qualitatively, this is it. It's sort of the CARFAX for press buyers."

Gwin's Printing, based in Mobile, Alabama, has become the most technologically advanced commercial printer on the Gulf Coast. “We owned two older digital presses and have recently installed a new digital press from the same manufacturer,” explains Randy Osmon, General Manager at Gwin's Printing.

“We decided to run all three machines through the SmartBuy rating process. It was a way to learn what might be enhanced or deficient with the older or newer machines. We discovered that while the machines scored very well against printers in the same class, the older and newer machines performed pretty similarly. ITL suggested that the new RIP could have influenced the results, so we’re working on it. Our new printer offers more features and our oldest press was customized to run lightweight stock, so they have niches that we use them for,” says Osmon.

Osmon adds, "It struck me that SmartBuy would be particularly attractive when purchasing a used machine. If I am buying a new or used machine and moving it here, I can test how it is printing at the time I am about to make a decision, and then make sure it is running well when it is installed. I can build that into the contract.”

Why WestRock Relies on G7 for Color Management