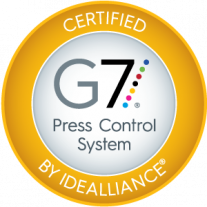 The D-Tone-G7 Process Control System with DTone1 Software from Dragon Tone is a multi-process, patented press control technology that can be used to control the G7 gray balance, tonality, and many more press conditions in lithographic printing. It is only the second press control system to gain certification since Idealliance introduced the G7 Press Control System Certification Program in January 2016.

"The Idealliance G7 Press Control System Certification program has confirmed that D-Tone-G7 Press Technology can monitor and control a production press run according to G7 gray balance and tonality specifications through the use of the D-Tone 5040K- G7 Control Strip," says Tim Baechle, Idealliance Director of Global Print Media Markets & Technologies. "We congratulate Dragon Tone on producing the world’s second press control system to elevate G7 from a calibration procedure to a complete process control system from prepress to pressroom." The D-Tone Control Strip consists of large unbroken sections of alternating 50% Black and Neutral Gray CMY patches, with only a small number of conventional solid ink patches. This unique design principle makes it the first press control strip to make judging gray balance and tonality visually a practical alternative to traditional instrument-based measurements. Both instrumentation and visual judgment can be used together for best results.

"Thanks to this unique design concept, the visual judgment of gray balance and tonality is, for the first time in history, a practical alternative to traditional instrument-based press control," says Don Hutcheson, of HutchColor, LLC, who directed development of the Idealliance G7 Press Control System. "When combined with instrumentation, the D-Tone strip’s visual component lets the press operator react more quickly and more confidently to small changes in tonality or gray balance."

The D-Tone gray balance press control technique was developed in 2007, innovatively adopting a visual comparison technique that is instinctive to everyone, amplified by the Mach Bands Effect. Since its conception, hundreds of millions of sheets have been printed using this D-Tone process controlling technique for managing print quality and the products were successfully delivered with great customer satisfaction.

Moving Press Checks from to the Home