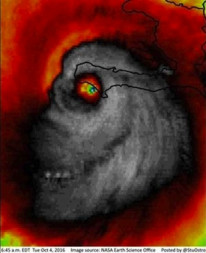 JACKSONVILLE, Fla. — October 6, 2016 — The East Coast is bracing itself for Hurricane Matthew, the nastiest storm to hit the Caribbean in the past decade. The storm, which was on the brink of a Category 4 as of Thursday morning, is responsible for the deaths of at least 113 people in three countries.

The U.S. National Hurricane Center is extending the warning zone for Hurricane Matthew from Florida's Atlantic coast all the way into northern Georgia, the Associated Press reported. Florida Governor Rick Scott warned that the damage could be catastrophic if the state takes a direct hit from Matthew, and he pleaded with the 1.5 million people in the targeted area to follow the evacuation orders. The Carolinas also stand to be impacted, but the Hurricane Center said it was too early to tell where Matthew would do the most damage.

Sustained winds reached 125 mph overnight Wednesday. It is tracking northwest at roughly 12 mph. The eye of the storm is expected to pass through northwestern Bahamas on Thursday.

Printing companies that haven't had to deal with this kind of storm for many years found themselves initiating business continuity plans. For example, Drummond Press — a commercial printer located here in Jacksonville, in the northeast corner of the state — sent a letter to customers notifying them that the shop will close at 4 p.m. today and will remain shut down on Friday.

"As called for in our Business Continuity Plan, we have identified jobs that could potentially be impacted by this closure," wrote Chairman and CEO John Falconetti. "We are communicating with clients regarding these projects, and making preparations internally to shift any impacted work to our Atlanta Division. We expect that these preparations will allow us to meet all our clients' expectations while providing for the safety and well being of our team members."

Another print shop, Consolidated Label of Sanford, Fla., posted the following message on its website:

"The safety of our employees is our Number One priority during these times. We will make every attempt to continue normal operations as conditions allow but, in the event of a closure, we will resume operations as soon as we are clear from any danger to our teams."

The Palm Beach County (Fla.) Graphics Division, the county's in-plant, closed early on Wednesday after staff prepared the facility for the hurricane. The in-plant is on call for storm-related emergency printing.

The building has hurricane-proof glass and doors, so in-plant manager John Johnson is optimistic it will withstand the storm. He says the shop was busy printing signage and programs for conventions that were scheduled this week, until they were all cancelled. One of them, ironically, was the Southeast Florida Regional Climate Leadership Summit.

Gabe Hernandez, president of the Printing Association of Florida (PAF), said that his association will likely be fielding calls in the aftermath of the storm. He noted that the size of Hurricane Matthew and the slow speed in which it is moving is a recipe for disaster. The PAF is in Orlando, the middle of the state, and they are projected to experience winds of 90-100 mph.

"The sustained winds they are projecting for the coast, 120 mph, are catastrophic," he said. "Most printers further south are closed today, or closing. We're shutting down at 1 p.m. ourselves.

"On radio, they're telling people to be in their homes no later than 5 p.m. today and not leave. The governor is pretty much guaranteeing we'll be without power for a period of time."

Hurricane Matthew presents a good reminder for printers to have disaster contingency plans in place, including in-house redundancy capabilities, offsite/Cloud storage of customer data or pre-established agreements with other printers to continue any work in process. Having proper business loss insurance, including flood damage protection, is also essential.