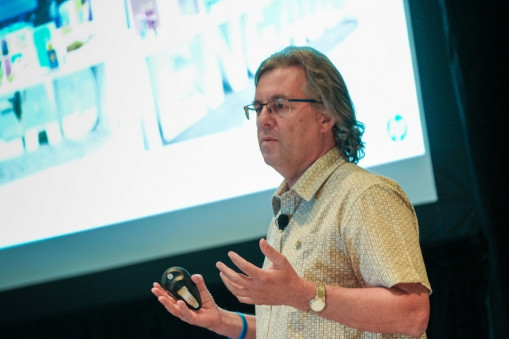 Tempus fugit. Not only was HP (Booth 613) celebrating 40 years of Indigo as a digital printing platform, but, in a press conference held Monday afternoon, noted that it was 16 years ago - at PRINT 01 - that HP had announced its acquisition of Indigo. It seemed fitting, then, that the company celebrated its 600th HP Indigo Series 4 large format press installation, to Carol Stream, Ill.’s American Litho. Even while looking to the past, Alon Bar-Shany, General Manager, HP Indigo Division, HP “won’t stop thinking about tomorrow.” The high-end 30-inch Indigo 50000, which launched last year at drupa, is now out of beta, and has seen its first installation. Bar-Shany highlighted some unique applications for which companies are using the HP indigo platform, such as Kansas’ Pioneer Line which prints customized balloons.

Dwayne Black, Senior Vice President and Chief Operations Officer for Shutterfly, a leading producer of customized photobooks and other personalized products, spoke about how the HP Indigo helped the company grow from a very small player in 2001 to a major brand. “We don’t worry about printing anymore,” he said, citing the reliability of the HP Indigo platform.

HP also offered an update of its production inkjet side of the business, noting that the name has changed from PageWide Web to PageWide Industrial, which is intended to clarify HP’s branding as it moves into corrugated packaging, and develops a symbiosis with the HP Scitex Industrial products.

Weisner also highlighted the Link technology, which added invisible codes to a printed page that can be scanned with a smartphone. “Print is becoming part of a megatrend that bridges offline and online and brings print into the internet of things,” he said.