TEL AVIV—From July 6-9, this cosmopolitan city nestled along the Mediterranean coast served as the destination point for nearly 300 HP Indigo customers and prospects who traveled from around the world to attend the “HP Indigo 2015 Worldwide VIP Event.” They did not go home disappointed.

The formal program kicked off with a tour of HP Indigo’s ElectroInk and digital press manufacturing plants, and testing and packaging centers, in nearby Kiryat Gat, a high-tech industrial park that also houses a large Intel facility across the street from the HP Indigo campus.

The program kicked off with a presentation by Alon Bar-Shany, VP and GM of the HP Indigo Div. He detailed numerous triumphs and tribulations that the country of Israel has faced over the past several years; its robust business environment for venture capital funding, M&As and high-tech IPOs; as well as the Israeli people’s strong innovative spirit. That same innovative heritage can be found in the graphics arts industry—as exemplified by the launch of the Scitex Dolev 800 imagesetter in 1992 and the Indigo E-Print 1000 digital press in 1993.

Fast-forward to 2015 where HP Indigo’s total customer volume is expected to reach 28 billion B-format pages, a 28x increase since 2001. With more than 6,700 HP Indigo presses in use worldwide, the newest “series 4” HP Indigos—which were announced at drupa 2012—have now reached 250 units in the field, according to Bar-Shany. Among them, 200 29˝ HP Indigo 10000 presses have been sold so far, including customers such as Sandy Alexander, Sun Litho and Genesis Direct, which have installed three 10000 units each.

Latest enhancements for the HP Indigo 10000 include additional ElectroInk inks, including white, light cyan, light magenta and spot colors; and HP Indigo Enhanced Productivity Mode (EPM), which eliminates black via three-color printing and enables an increase in color printing output by 33 percent. About 25 percent of pages printed on HP Indigo 10000 presses are now said to be done so using EPM.

Launched in June 2014, the HP Indigo 7800 digital press now features an Optimizer (formerly known as Smart Scheduling) application. It boosts productivity by up to 50 percent per shift via an on-press algorithm that constantly optimizes print queues. Also new for the 7800 series is a fluorescent pink ElectroInk and an imaging oil recycling system that eliminates the need for additional imaging oil.

Bar-Shany also described HP Indigo’s emphasis on targeting major brands in the beverage, cosmetic and apparel sectors to drive the market for personalized printing on HP Indigo presses. Among them, HP Indigo customers are once again helping expand the “Share a Coke” program globally.

Since 2013, it has reached 50 countries, including the United States for the second year in a row, with more than 4 billion labels (and counting) printed on HP Indigo presses. This summer, Coca Cola is also celebrating 100 years of the Classic Coke contour bottle, leveraging HP digital printing via Web-to-print capabilities in 24 countries. 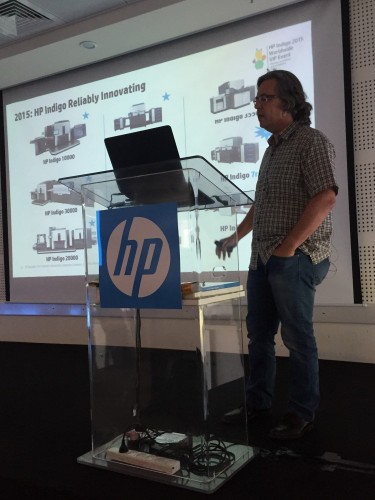 Bar-Shany noted that the commercial/photo/publishing markets still comprise 75 percent of HP Indigo sales, with packaging accounting for the remainder. However, with the growing demand for labels, folding cartons and flexible packaging, he expects that to be 50/50 in the next few years.

The next two days featured a visit to HP Indigo’s corporate headquarters and co-located R&D operations in Ness Ziona, as well as HP Indigo customer site visits based on each attendee’s chosen interest track, and sightseeing tours of Jerusalem, Akko, Jaffa and Masada.