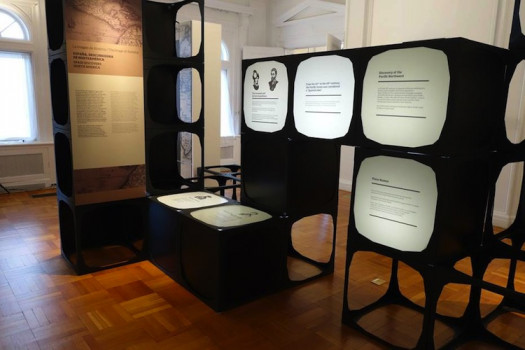 Coming to the United States in February, the "Designing America: Spain's Imprint in the U.S." exhibition, was produced in collaboration with HP.

WASHINGTON—January 8, 2016—HP has announced its collaboration with the Fundación Consejo España-EE.UU. (Spain-USA Council Foundation) to help bring the "Designing America: Spain's Imprint in the U.S." exhibition to the U.S. using cross-portfolio HP digital print technology to reproduce a series of documents and maps dating back to the 16th century.

Spain was the first European country to settle in what is now the United States of America, and its influence is still present 500 years later. The "Designing America" exhibition takes visitors on a journey through Spain's many contributions in shaping the U.S.'s territory, landscape and cities, with over 20 maps, images and objects on display. Visitors will also see an interactive installation showing the cities and towns in North America with names of Spanish origin, as well as the ability to view and zoom in on a selection of these historical maps using a 42-inch HP touchscreen.

HP played a strategic role in overcoming technical challenges involved with moving the exhibition to the U.S., bringing in three HP print services providers to reproduce all of the display material, print all of the informative and promotional documents, with HP also providing its latest personal systems technology to power the exhibit’s interactive features.

Worthy of particular note is the digital reproduction of 16th and 19th century documents and maps, a true challenge that resulted in top quality prints with absolute accuracy with regard to the originals. RPG Squarefoot Solutions (Laurel, Maryland) handled these sensitive reproductions in addition to printing supporting information for visitors using an HP DesignJet Z6800 photo production printer. HP DesignJet technology was chosen because of its versatility in finishing and materials, and its ability to reproduce a range of applications, from works of art to professional photographs and back-lit panels with extremely high quality, while delivering competitive turnaround times and production costs.

"HP boasts the market's broadest graphics printing portfolio, from large-format to general commercial printing technology, which enables us to participate in projects like this that require a variety of solutions and high standards in terms of quality, color, finishing and speed," said Xavier Garcia, vice president and general manager, HP Large Format Printing Business. "This project allowed us to demonstrate the full potential of HP technology, working in partnership with our customers to bring the 'Designing Americas' exhibit to the United States."

The exhibit will be on display through Feb. 28, 2016, hosted in the Former Residence of the Spanish Ambassadors to the U.S., a mansion built in 1922 that remains an important cultural centre in Washington D.C. The exhibit will then continue its tour around the U.S. with its next stop in Houston, Texas, expected to open on April 14, 2016.

HP Spain has a long track record of collaboration in cultural projects. Every year it takes part in dozens of initiatives that promote the awareness and access of culture among citizens.

"When we were given the opportunity to get involved in this project and make it possible for the 'Designing America' exhibition to travel to the U.S., we didn't think twice about participating, said Helena Herrero, president of HP Iberia, "Partly because of the exhibition's rich cultural and historical content, and also because of the rich bond between our company, the U.S. and Spain."

Moreover, HP Spain is a member of the Board of the Fundación Consejo España-EE.UU, the main goal of which is to encourage collaboration between Spanish and US companies.

About HP
HP Inc. creates technology that makes life better for everyone, everywhere. Through its portfolio of printers, PCs, mobile devices, solutions, and services, HP engineers experiences that amaze.

(1) Scratch-resistance comparison based on testing HP Latex Inks and representative hard-solvent inks. Estimates by HP Image Permanence Lab on a range of media.