In the 1855 poem “Andrea del Sarto,” Robert Browning included the sagacious sentiment that “less is more,” which many of the Englishman’s artistic successors have proven with aplomb, mainly through their allegiance to minimalism. However, with respect to branding products, many industry figures find themselves inclined to shun the no-frills approach, feeling that all-out attempts to create eye-opening logos will leave them up to their eyeballs in revenue. Sylvain Boyer would likely be a better chum to the writer than to the latter individuals, as he is using his role as an Interbrand Paris creative director to call on companies to use less ink in their handiwork, therefore helping them cut costs and brand themselves budding environmentalists.

We all have heard that “bigger is better” in terms of drawing attention, and many people would probably pair “brighter” with the size-specific adjective to support their thinking that emblem makers must spare no expense so as to excel in the corporate world. While the wide-format sector is enjoying a hot streak for signs and displays crafters, one could argue that a toned-down symbol could prove just as effective. Through Ecobranding, his four-year-old project, Boyer is championing cheaper measures to match eager businesses with longtime end-users and prospective consumers. 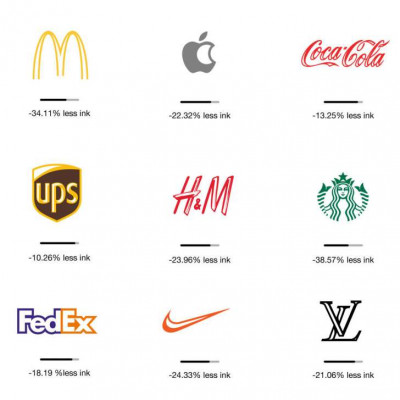 Ecobranding would have very familiar logos reduce their ink supply in the name of helping the environment. (Image via Ecobranding)

“It may seem stupid, but it’s by being confronted with the reality of the deployment of the design that I became aware of that every decision … had a direct impact on our environment,” he said of the inspirational event behind his brainchild, namely the creation of a birth announcement for his daughter that proved quite costly. “When a designer designs a logo for a major brand, this logo will be reproduced millions or billions of times, and all this has an ecological and economical impact.”

With a website promise that Ecobranding “can change your brand design to cost 10 to 40 percent less and protect more trees,” Boyer has engaged in many mockups of well-known logos, reducing the ink supply of such powerhouses as Coca-Cola (13.25 percent), McDonald’s (34.11) and Nike (26.33) and compelling corporations to ponder if their moneymakers can still accumulate good old greenbacks despite the alterations.

“Change is never easy” goes another popular saying, so one wonders for whom accepting different designs would be a harder sell, tycoons or average Joes. The former, according to Boyer’s computations, would save money by conserving ink and shrink their environmental footprint by issuing logos whose production would include fewer airborne volatile organic compounds. Would the thought of conserving cash be enough to give them a firmer grasp on their roles as protectors of the environment, or would they fear backlash over the tinkering with the emblems? The latter group might appreciate the concern for the planet on the part of the bigwigs, but would its members grumble and feel as if the providers of their cherished products have betrayed them?

The second part of that end-user-based scenario might sound a bit farfetched, but we all know (some of us have likely displayed this, too) that people hold deep allegiances to commercial representations. Thus far, Boyer has not had the chance to provide comprehensive answers, as his Ecobrand guidelines have attracted but one partner, Citeo, which, very aptly so, protects the environment by collecting, sorting and recycling waste.

He had hoped to establish “the fist brand agency dedicated to the ecological transformation of the brands” before his employer secured the connection, but Boyer could come to call on Ecobranding to convince companies to use fewer ink-demanding typefaces and to fashion business cards that use less paper, among other initiatives.

Through the interaction with Citeo and the hypothetical re-branding work, Boyer has involved himself with existing presences in the pursuit of visual persuasion. One wonders how he might fare with a newcomer interested in saving dollars and the planet simultaneously. Are there any takers out there?