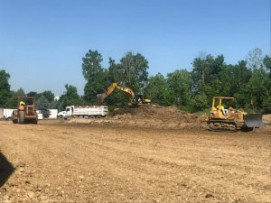 Earth-moving equipment from Renier Construction begins clearing the area for the plant expansion.

When commercial printer Hopkins Printing relocated from its south side of downtown Columbus, Ohio, location in 2000 after constructing its current, 75,000-sq.-ft. facility located on CityGate Drive, the back of the nine-acre site was intentionally left open for future expansion. That day has come.

Construction has begun on a 33,000-sq.-ft. expansion that will enable much-needed warehouse space and room to complete fulfillment projects for Hopkins' retail and Web-to-print (W2P) clients. 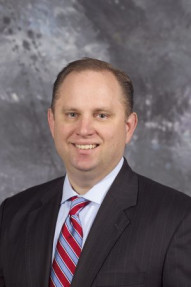 "We planned for this addition 18 years ago with a layout that would be easy to expand and grow," says Roy Waterhouse, Hopkins Printing president. "Our Lean initiatives have helped us make great use of the current space, but the addition will help us to add more services for our customers."

He explains that Columbus is a headquarters location for several retailers, and the printing and kit packing of in-store signage for them has become a growth market for his firm during the past six years. Similar work, to a smaller degree, is also done for banking, insurance and real estate clients. The additional space will also help Hopkins Printing store and kit pack products for its approximately 30 digital storefront Web-to-print (W2P) customers, which comprise a wide range of vertical industries, according to Waterhouse.

With the fulfillment operation formerly located in the shop's bindery area, the new addition will also create room for the installation of more finishing equipment. Waterhouse reveals that he is looking to add a backup saddle stitcher and a small perfect binder.

"One of our points of constraint is in stitching," he says, pointing to larger projects that require stitching.

Ranked Number 236 with most recent fiscal year sales of $19.42 million - a 10% increase over the previous year - on the 2017 Printing Impressions 400 list (click here for complete PI 400 rankings) of the top printers in the U.S. and Canada, he reveals that the privately held Hopkins Printing is forecasting sales this year to surpass the $20 million mark. Waterhouse notes that the company brought aboard a new salesperson (making for a total of 10 sales reps) last month, who brought a book of business that enabled Hopkins Printing to hire four other people to the 106-employee operation.

Hopkins Printing became an ESOP (Employee Stock Ownership Plan) company in 2007 after its founder, James Hopkins (a 2006 Printing Impressions/RIT Printing Industry Hall of Fame inductee), backed out of an initial  letter of intent to sell the company to Houston-based Consolidated Graphics, an industry consolidator then-led by Joe Davis that, itself, was later sold to R.R. Donnelley. At the time, Hopkins decided that the ESOP structure would be in the best interest of his company and employees.

"Internally, the ESOP is becoming important to our workers, especially as they retire - and then word gets around [the plant] what their stock is worth," Waterhouse points out. The ESOP structure has also proven to be beneficial when Waterhouse hosts customer tours, and can point out that all of the employees have a a vested interested in making sure that each customer's quality and service requirements are met and even surpassed.

A graphics communications leader in the central Ohio area, Hopkins Printing has been named "A Best Workplace in the Americas" by Printing Industries of America multiple times and has received the Better Business Bureau Integrity Award. In addition, Hopkins was named a "Top Small Company Workplace" by Winning Workplaces and was also featured in Inc. Magazine for its innovative cross-training program.