YAVNE, Israel — June 24, 2016 — drupa 2016 was a major triumph for Highcon, with a staggering number of visitors and widespread interest which resulted in business success that will transform the company — founded only six years ago — by adding a record $42m of orders taken during the show. With 30 machines installed in 15 countries to date, Highcon is on the verge of doubling its installed base within months, delivering dozens of machines to new customers and into 11 new countries in Europe, Asia, Latin America and Africa. A further 100 sales proposals were issued at the show, many of which will come to fruition as new orders in the coming months. The company will be recruiting new distribution channels, as well as R&D, service and sales personnel to support this rapid growth and new customers. 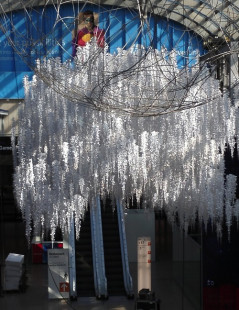 This display was designed by Wanda Barcelona.

Commenting on Highcon's success at drupa, Highcon CEO and Co-founder Aviv Ratzman, said, "drupa 2016 has been a tipping point for our business and a real reinforcement of our vision. Our collaboration with leading designers from all over the world brought a throng of visitors to our booth, confirming the emphasis Highcon places on design creativity, while the orders we received were testament to the production capabilities of the Highcon digital cutting and creasing solutions which ran constantly throughout the show."

He continued, "Sales to both new customers and existing customers have surpassed our expectations by far. drupa has been the confirmation that digital technology, and finishing in particular, has reached the point where it is making a mark on our industry. Many of the customers we met in drupa have realized the need to start investing in technology rather than continue to expand capacity, adding value to their products instead of competing on price."

At drupa 2012 Highcon launched revolutionary digital finishing technology under the slogan of "Packed with Promise." Only four years later, drupa 2016 demonstrated the fulfilment of that promise and a resounding validation of the company vision. This was made evident not only by sales, but also with the enthusiastic affirmation by industry leaders that digital finishing is becoming a critical element in mainstream production processes. The spectacular displays designed by Wanda Barcelona, paper fashion by Merav Peleg, the 3,600 layer column from Michael Hansmeyer, and the huge popup book by Peter Dahmen, in conjunction with the dozens of customer samples on the booth, showcased precisely the far-reaching capabilities of these solutions.

The following products were showcased at drupa: