Now, the company is installing a second Speedmaster XL 106-8P with the latest Push to Stop technology from Heidelberg to further improve performance and reduce its manufacturing footprint.

“We are consolidating our Utah plant with our Kansas site to have our production centrally located,” said Doug McWilliams, VP of operations. “Because of our success with the first XL 106, it only made sense to purchase a second one. The process has been somewhat identical in that we’re replacing another three competitive presses with the newest XL 106.” 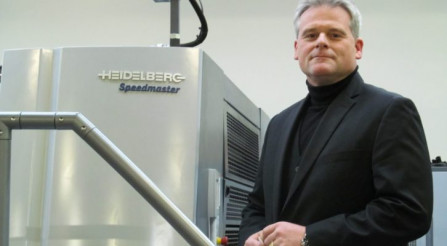 Doug McWilliams is the VP of operations at Herff Jones.

The new press will run alongside the existing XL 106 as well as a Stahlfolder KH 82 and a POLAR pile turner. Together, the mix of solutions will provide increased productivity and shorter makereadies to keep pace with the tight production window in the yearbook industry.

Adding to its already impressive suite of peak performance equipment, the new Speedmaster XL 106-8P press will take the company’s production to a new level with Heidelberg’s breakthrough Push to Stop concept. With Push to Stop, jobs are autonomously changed over without operator intervention and continue to print until the operator steps in to interrupt if required. All of this is made possible with Intellistart 2, a new and unique integrated software system for effective job preparation, which reduces the number of operating steps during a job change by approximately 70%. The systematic elimination of time losses with every job change leads to consistent time savings and increased efficiency.

As a leading yearbook manufacturer, the company produces approximately four million yearbooks annually with average runs of 525 copies. According to McWilliams, the production window for yearbook printing has become narrower as school schedules continue to change. By adding the new XL 106, Herff Jones will be able to maintain their strenuous production schedule – printing the bulk of its work with offset instead of digital – handling 90 makereadies in a normal eight-hour shift.

“Heidelberg is honored to work alongside Herff Jones, supporting their commitment to provide the shortest time to market without compromising outstanding quality,” said Clarence Penge, Vice President, Sheetfed, Heidelberg USA. “By taking advantage of Push to Stop and Intellistart 2, Herff Jones is able to automate multiple steps of production in a smart manufacturing environment to drive profitability. We are excited to integrate this into their environment, and wish them continued success.”