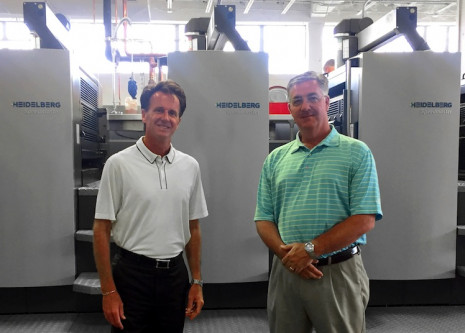 The new CD 102-X replaced a 1999 Speedmaster CD 102 and runs alongside an older Heidelberg SM 102. Installed in January 2017, the new press has increased capacity by 50%, and Brodnax offset sales have already grown by 20% in just the first quarter.

With just one working press, Heidelberg’s SystemService team “overdelivered” to  complete installation and training in less time than scheduled. On just the first pressrun, Brodnax ran a job that historically took 13 hours to run on their old machine. With the new CD 102-X, the team was able to complete the job in just under 6 hours.

In addition to increased automation, the new hybrid machine can switch between conventional and UV printing. As a result, Brodnax has now pulled more than 50% of the work off of their old machine. “When we were researching this press, people told us that changing over between conventional and UV would be long and laborious. That couldn’t be any further from the truth. This machine has more than exceeded our expectations as far as changeover times are concerned,” said Singer.

The Speedmaster CD 102 with X-Package is proving to be one of the best value and most cost effective presses in the market based on its price point and ability to deliver up to 40 million impressions per year. On a cost per sheet basis, it beats any competitive press — maximizing the profit potential of its output.

While Brodnax, in its 60th year of business, has purchased multiple new presses from Heidelberg, they were originally intending for this latest purchase to be a used machine. According to Singer, “When we were looking at the numbers for the CD-X, it was actually a no brainer. This machine pays for itself.” After just three months of production, Brodnax is on track to save $140,000 in makeready waste and $90,000 in labor costs this year.

Due to the increased throughput of the press, Brodnax had to purchase a POLAR pile turner to help get sheets through the press faster. Additionally, the new press created a bottleneck in their finishing department. “We couldn’t cut the sheets fast enough,” said Singer. “Whenever you invest in a new technology in one part of your business, it’s going to affect something downstream.” To ease the load for their operators, Brodnax purchased a POLAR stack lift and jogger for their existing POLAR cutter. The additional automation has increased throughput in the finishing department by 80%.