BRANDENBURG, Germany — June 27, 2016 — The Brandenburg plant of Heidelberger Druckmaschinen AG (Heidelberg) celebrated its 25th anniversary on Saturday, June 25, with an official ceremony and a family day that was attended by some 2,000 visitors. The guest of honor at the festivities was Brandenburg’s Minister of Economic Affairs and Energy, Albrecht Gerber. In April 1991, the world’s largest press manufacturer had started production in rented premises at the Brandenburg location. The foundation stone for the new plant in the Hohenstücken industrial zone was laid in May 1992 by the then Federal Chancellor Helmut Kohl. The first components for sheetfed offset presses started rolling off the brand-new production line just five months later.

The guest of honor at the festivities was Brandenburg’s Minister of Economic Affairs and Energy Albrecht Gerber (left), standing with Plant Manager Gerwin Cordes.

Brandenburg had won through against several alternative locations both in Germany and abroad as the site where Heidelberg would expand its production capacities. In addition to its excellent infrastructure, the area was also home to a large number of highly skilled engineers with experience in the metal-processing industry. The Brandenburg plant initially produced standard mechanical parts. But over the years it added more and more large and complex parts and assemblies — particularly shafts, rollers, and flat and profiled parts up to 4 m. in length. Since the plant was commissioned, Heidelberg has invested approximately EUR 220 million in the site, most recently in state-of-the-art production technology, a driverless transport system, and energy-saving LED lighting throughout the entire plant.

Brandenburg today is an important part of the Heidelberg production network which has its main sites in Wiesloch-Walldorf near Heidelberg and Amstetten in the Swabian Alps. Around 8,000 different parts are manufactured on the company premises in the north of the city. A significant number of all the mechanical components installed in Heidelberg presses come from here. “The site stands for 25 years of passion, precision, and partnership,” emphasized plant manager Gerwin Cordes at the festivities. 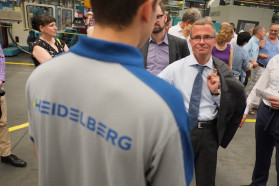 Alongside the parts that Heidelberg manufactures for its own needs, the some 500 employees, including almost 50 trainees, also produce special parts for external customers. The Brandenburg site is one of the largest industrial employers in the city and, in tandem with other companies, is an important partner in the training network for young people. Heidelberger Druckmaschinen AG also plays an important part in the economy of the city and region, both of which profit from its presence due to the network of suppliers and service providers that serves the company.

The ceremony in the morning was held under the banner “Back to the future” and featured a journey through time. Following this, around 2000 employees with friends and family enjoyed a colorful party with inflatable castles, music, food, drinks and guided tours through the production halls featuring “Machine tools in action." As a special memento of the day, employees and guests were able, for a small donation, to take home a model of the Brandenburg Steintorturm tower manufactured on the same day. The proceeds from this campaign will go to the city’s youth fire service. Visitors were also able to take part in guided tours through areas of the site that are normally out of bounds. Another attraction was the “Geisterhand” driverless transport system.

At an anniversary breakfast held prior to the official ceremony, Heidelberg production manager Heribert Wille, Brandenburg plant manager Gerwin Cordes, and the site’s HR manager Marcus Kielmann paid tribute to 76 employees celebrating 25 years of service. That represents almost one sixth of the entire workforce at the site.