WIESLOCH, Germany—December 4, 2015—As a folding carton manufacturer or commercial printer producing short to medium runs, how can I attract and retain new customers? And how do I assure the high quality required in the pharmaceutical and luxury goods sectors in particular? What machines support efficient and cost-effective production? The more than 150 visitors to the Packaging Days received detailed answers to all these questions. The event, organized by Heidelberger Druckmaschinen AG (Heidelberg), was held at the company’s Wiesloch-Walldorf site in mid-November.

The MK Qmini 420/550 offline inspection system doesn't just check the print quality but also the embossing, foil and hologram positions, and the reverse of the sheet.

Here, guests from Europe, the Middle East, Africa and South America, saw the presentation of the new MK Easymatrix 106 CS diecutter and the MK Qmini 420/550 offline inspection system, which are tailored precisely to customer needs. These machines are part of the successful collaboration between Heidelberg and its Chinese partner Masterwork Machinery Co. (MK)—see also "Partnership" press release.

Customers confirm high quality and optimum price-performance ratio of the MK Easymatrix 106 CS
Sales of the MK Easymatrix 106 CS diecutter have made a good start following successful field tests. Eight machines have already been installed in Europe, Latin America, and the Middle East, and demand is also high in Asia. As an entry-level model, this machine is also aimed at commercial printers looking to bring their diecutting and embossing applications into their own value added chain and thus make themselves independent from outsourcing.

The MK Easymatrix 106 CS performs diecutting and embossing at a speed of 7,700 sheets/hr. and scores highly with its fast makeready, non-stop processing, and delivery with safety device. Operators can thus remove and inspect sheets on the fly without stopping production. The machine bears the GS seal, and initial users are impressed with the high quality. Sales and service are handled by Heidelberg, ensuring customers receive everything from a single source, ranging from experts’ know-how in training and applications to comprehensive spare parts supply and rapid service call-outs. 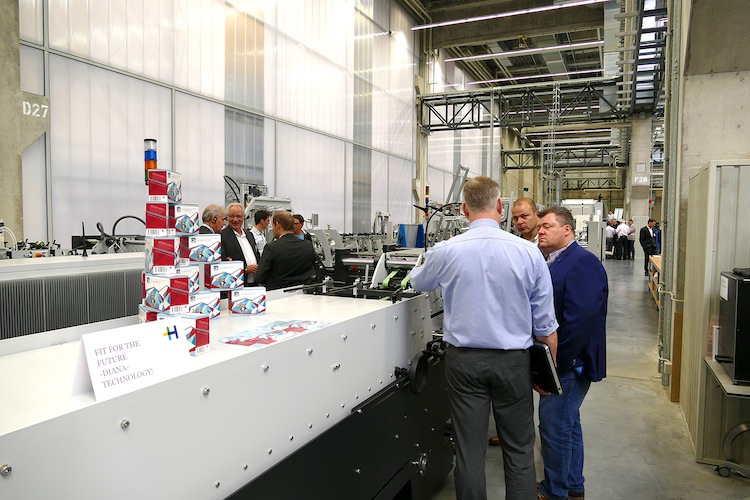 The Diana Smart 80 folding carton gluing machine features new options such as the collapsible box module that enables four- and six-corner cartons. Eighty percent of all standard folding cartons can thus be produced with the Diana Smart.

The launch of the MK Easymatrix 106 CS builds on the success of the high-performance MK Promatrix 106 CS, which Heidelberg has been selling since the start of this year. Ten customers have already installed the MK Promatrix 106 CS and benefit from its high automation level, which ensures increased productivity. A number of machines are used for production in Europe. The second MK Promatrix 106 CS in the UK will be taken into operation at a commercial print shop by the end of the year. The machine was put through its paces with customer jobs beforehand and the customer was impressed by the rapid makeready times, low waste, and high quality.

Quality is everything—with the MK Qmini 420/550 offline inspection system
Top quality and end-to-end reliability are essential in the pharmaceutical and luxury goods sectors in particular. Existing in-line inspection systems have their limitations with regard to foil applications and embossed areas. Visitors to the Packaging Days have now had their first opportunity to see how the MK Qmini 420/550 offline inspection system plugs this gap. The MK Qmini doesn’t just check the print quality but also the embossing, foil and hologram positions, and the reverse of the sheet. Various light sources and up to four cameras are used to do this. The operator simply specifies what type of inspection is required and the machine automatically selects the necessary combination of light sources and cameras. The patented light source technology is unique on the market and enables inspection at speeds of up to 120,000 cartons/hr.

The MK Qmini is available for cartons with widths of 420 and 550 mm (16.54 and 21.65") and Heidelberg has already sold a number of units to customers who need to meet the high expectations and standards of reliability in the pharmaceutical and luxury goods industries. These customers report 100 percent inspection of even the most challenging jobs without slowing down the production process, far fewer customer complaints, and less waste, as the removed cartons are not damaged and can thus still be used as seconds. The MK Qmini produces quality reports that are used as documentation for end customers and quality assurance.

Since the start of this year, Heidelberg has been selling the high-performance MK Promatrix 106 CS.

Cartons inspected in this way can then easily be processed further in the Diana folding carton gluing machine. This was demonstrated at the Packaging Days using the Diana Smart 80 and Diana X 115. New options were unveiled for the Diana Smart series such as the collapsible box module that enables four- and six-corner cartons. Eighty percent of all standard folding cartons can thus be produced with the Diana Smart.

Overall, production for the Diana series in Nove Mesto is running at full capacity and the machines are valued by large packaging groups and medium-sized folding carton manufacturers alike.

Perfect partner and innovative technology
The partnership between MK and Heidelberg first and foremost delivers products that enable the efficiency and cost-effectiveness that customers need. As well as the MK Promatrix and MK Easymatrix, the MK portfolio also includes a hot foil embossing machine. This machine has already been installed successfully in Poland and follow-up orders have now been placed in France and Italy. Demand for applications for surface finishing is high, with the result that further foil machines will follow such as the MK Duopress, which can apply foils and perform diecutting in a single pass.

Alongside the Packaging Days in Germany, Heidelberg has also organized popular open house events in the U.S., Latin America, and Asia to demonstrate the partnership, products, and customer benefits of its innovative technology. Further new products will be on show at drupa 2016.