Heidelberg Reports It Has Reached Important Strategic and Financial Milestones 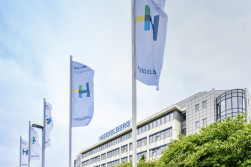 HEIDELBERG, Germany - February 8, 2019 - Throughout financial year 2018/2019, Heidelberger Druckmaschinen AG (Heidelberg) is consistently pursuing its strategy of using digitization and collaborations to establish business models that deliver sustainable profitability. This includes, on the one hand, the move announced January 23, 2019, to reinforce activities in the growth market of packaging printing by expanding the partnership with China-based Masterwork. The intention is to expand the strong market position in this segment, better address the potential in China and Asia, and achieve efficiency improvements by further extending cooperation in production.

On the other hand, Heidelberg has also reached key milestones in the roll-out of its “Heidelberg goes digital” strategy. Following the signing of 26 contracts for the new subscription model in the first nine months, the next interim target, as previously announced, is 30 contracts by the end of the financial year. This corresponds to an order volume of approximately €150 million.

In addition, series production of the Primefire digital press is continuing and the Heidelberg Digital Unit has been created to handle the significant expansion in e-commerce sales. Future growth will also be driven by the sector’s largest and most advanced innovation center, which was opened in Wiesloch in December. Heidelberg is furthermore able to make ever greater use of its skills outside the printing sector, such as in electromobility. For example, the 1,000th Heidelberg Wallbox – a new charging system for electric cars – has already been delivered. In the medium to long term, Heidelberg aims to generate approximately €50 million in sales with this product and others like it.

“We have reached important strategic milestones in financial year 2018/2019. The enhanced partnership with Masterwork opens up a great deal of potential for us in the growing packaging sector and on the huge Chinese market,” comments Heidelberg CEO Rainer Hundsdörfer. “There is strong demand for the subscription model, our digital presses have now entered series production, and we are leveraging our skills for e-mobility. This progress makes us very optimistic about the future development of Heidelberg.”

During the period under review (April 1 to December 31, 2018), sales at Heidelberg increased by approximately 2 percent to €1,693 million (previous year: €1,657 million). Sales in the third quarter were lower than the previous year’s figures, largely due to deliveries being moved into the fourth quarter owing to supply bottlenecks at suppliers for certain product series, and due to the discontinuation of a funding program in Italy. At €101 million, EBITDA excluding the restructuring result did not quite reach the previous year’s figure of €105 million as a result of higher collectively agreed rates of pay. This also saw the EBITDA margin drop slightly to 6.0 percent. EBIT excluding the restructuring result totaled €49 million (previous year: €54 million). As anticipated, expenditure on restructuring measures aimed at improving efficiency rose from €1 million to €9 million. The non-recurring transaction and early redemption charges associated with the partial redemption of the current high-yield bond amounting to €55 million meant that the financial result rose from €–36 million to €–39 million after three quarters. As the same quarter of the previous year involved a non-recurring charge on income tax expenses of €25 million, the net result after taxes in the period under review improved significantly from €–10 million to €–2 million.

Operating cash flow was €50 million (previous year: €69 million). As in the preceding quarters, free cash flow was influenced by factors such as an increase in inventories (caused by the growing order backlog and longer-than-planned throughput times due to supply bottlenecks), the start-up of digital operations, and investments in the now-completed construction of the innovation center at the Wiesloch-Walldorf site. Accordingly, a value of €–120 million was recorded (previous year: €–20 million). At €361 million, shareholder’s equity was €16 million up on the equivalent period of the previous year and the equity ratio climbed accordingly from 15.3 to 16.0 percent. Due to the negative free cash flow, the net financial debt at the end of the quarter was €350 million (previous year: €244 million). Leverage, as measured on December 31, 2018, increased to 2.1, although this is set to drop back below the target value of 2 by the end of the financial year, in part due to the anticipated inflow of approximately €70 million from a capital increase that is still to take place when the new anchor shareholder joins.

“During the current financial year, we are stabilizing our consolidated balance sheet for the long term. Our balance sheet quality will be further improved, not just by the partial redemption of our high-yield bond, but more importantly by the capital measure associated with the entry of our anchor shareholder Masterwork, which is anticipated to take place in the final quarter,” said CFO Dirk Kaliebe.

Targets for financial year as a whole still in sight

In view of the high order backlog and the fact that the orders moved from the end of the third quarter were fulfilled in the first weeks of the final quarter, Heidelberg expects another strong fourth quarter. On that basis, the targets for the financial year 2018/2019 as a whole, which reflect a moderate growth in sales, can be confirmed. The EBITDA margin excluding the restructuring result is also expected to fall within a range of 7 to 7.5 percent, even despite higher collectively agreed wages. Taking into account previously announced restructuring costs in the order of around €20 million, non-recurring expenses from the partial redemption of the corporate bond, and rising tax costs at foreign subsidiaries, the forecast is for a moderate increase in the net result after taxes compared with the previous year (including non-recurring tax items in financial year 2017/2018).