HEIDELBERG, Germany — June 8, 2017 — At today’s Annual Press Conference for 2016/17, Heidelberger Druckmaschinen AG (Heidelberg) underlined its aspirations to further strengthen the company’s trailblazing position in the printing press sector with the presentation of a new corporate strategy. The company’s Management Board presented “Heidelberg goes digital!” – a package of measures for the years ahead with a strategic focus on technology leadership, digital transformation, and operational excellence.

Following the successful turnaround with a return to sustained profitability, Heidelberg will now also be aiming for continuous growth. Group sales of around €3 billion are being targeted with a large number of specific measures in the period to 2022. The company has set its sights on a further significant improvement in profitability, with EBITDA of €250 to 300 million and a net profit after taxes of over €100 million. Sales in financial year 2016/17 were just over €2.5 billion, EBITDA at €179 million and the net result after taxes at €36 million.

“Over the next five years, Heidelberg will once again become a leading light in the sector, enjoying strong growth and profits. We’ve defined the relevant success factors and have already introduced initial measures. This marks the start of a new era of growth for Heidelberg,” said the company’s CEO Rainer Hundsdörfer. 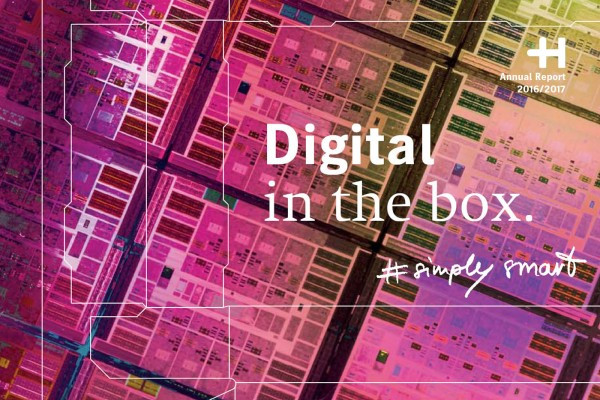 Profitable Growth Thanks to Innovations, Digitization, and Enhanced Efficiency at All Levels

The turnaround achieved by Heidelberg over the past five years with a rigorous restructuring program and a shakeup of its portfolio has led to sustained profitability. Despite a slight fall in sales, EBITDA doubled from the 2012 level to €179 million. Following a huge loss of €230 million five years ago, the company recorded a net profit after taxes of €36 million in 2017. The profitable growth now being targeted for the period to 2022 will be boosted by the following key strategies:

1. Technology leadership based on constant innovations focusing on customer benefits and aimed at improving productivity while also cutting costs in all print shop processes by maximizing efficiency. Heidelberg is looking to play a pioneering role in digitization (Simply Smart/Smart Print Shop) with its Push to Stop concept and also in industrial digital printing for the packaging market with the Labelfire and Primefire product lines. The objective here is to double the market share in digital printing from the current level of less than 5 percent to as high as 10 percent and generate additional sales potential amounting to around €200 million in the period to 2022.

2. Digital transformation, including the digitization and integration of the previously separate areas of equipment, software, services, and consumables with straightforward, transparent pricing of all offerings for customers. The entire work process at the customer’s print shop will be addressed from a single source using a single e-commerce sales platform. This will reduce complexity and costs for customers while also boosting their productivity. The aim here for Heidelberg over the next five years is to increase the company’s market share for consumables from the current level of 5 percent to just under 10 percent while also leveraging additional sales potential of €250 million. Part of this strategy is the takeover of Fujifilm’s coatings and pressroom chemicals business in the EMEA region, which represents a sales volume of some €25 million. It will take effect as of July 1, 2017. Heidelberg is using this takeover to expand in the attractive growth segment for consumables. The transaction is another step in pursuing the company’s growth strategy of developing a fully comprehensive cross-sector portfolio that is geared toward specific customer requirements and also further strengthens Heidelberg’s market position for coatings and pressroom chemicals.

Digital transformation also means that Heidelberg will offer its know-how to other plant and mechanical engineering companies and startups in the future. Heidelberg benefits from the software and engineering expertise forming part of the new possibilities offered by Industry 4.0 – with options such as an IT suite, a cloud-based platform, and production capacities. Industrial companies such as BigRep, for example, already have their latest products for additive manufacturing (3D printers) produced by Heidelberg. The aim by 2022 is for this to generate additional sales of some €50 million with well above-average profit margins. The recent acquisition of software supplier DOCUFY to strengthen the Digital Platforms business area and expand the Industry 4.0 portfolio underlines the company’s ambitions in this direction.

The two strategic focal points detailed above are intended to generate additional sales of at least €500 million by 2022. The additional operational excellence measures include efficiency improvements at all levels to ensure the company’s agility – without the need for a new comprehensive restructuring program. The emphasis is more on streamlining structures and processes, implementing agile production, the current relocation of our research and development activities to the Wiesloch-Walldorf site, and the optimization of the logistics wage structure that has just been initiated. The company believes this has the potential to cut process and structural costs by some €50 million over the next five years. What’s more, the existing and ongoing measures to lower financing costs will have a positive impact on the net result after taxes. Heidelberg is expecting these costs to fall by a further €15 million or so.

The Heidelberg Digital Technology (HDT) and Heidelberg Digital Business and Services (HDB) sectors were established on April 1, 2017 to prepare for the company’s digital future. HDT combines sheetfed offset, label printing, and postpress operations and is responsible for developing, producing, and marketing the appropriate technologies and products for new business models. HDB, meanwhile, is where Heidelberg manages its operations relating to services, consumables, remarketed equipment, digital printing technology and solutions throughout the value-added chain.

As communicated in the press release on May 5, 2017 with the preliminary figures for the financial year just closed, the best final quarter since 2008 enabled Heidelberg to meet its targets for financial year 2016/17. Sales rose slightly to €2.524 billion (previous year: €2.512 billion), with the final quarter 20 percent up at €845 million (previous year: €710 million). In the period under review, incoming orders of €2.593 billion bucked the industry trend by being significantly up on the previous year’s level (€2.492 billion). Despite the costs for the drupa industry trade show of €10 million in financial year 2016/2017, EBITDA excluding special items in the reporting period amounted to €179 million (previous year: €189 million, including non-recurring income of €19 million from the PSG takeover). This resulted in an EBITDA margin of 7.1 percent (previous year excluding PSG: 6.8 percent). The €85 million operating profit (EBITDA before special items) for the fourth quarter was over 20 percent higher than in the same period of the previous year. The net profit after taxes of €36 million (previous year: €28 million) is further evidence of the sustained turnaround in the company’s result. Improvements were also seen in the free cash flow, with a figure of €+24 million (previous year: €-32 million), and the net financial debt, which fell to €252 million in the year under review (March 31, 2016: €281 million). Last but not least, the leverage remained well below the target value of 2 at 1.4.

“In financial year 2016/17, we not only achieved noticeable operational improvements, but also made further progress with our balance sheet quality. Our very sound financial structure will enable Heidelberg to independently finance the upcoming investments taking the company into the digital future. Our future focus will remain on improving our asset management and cash flow, and on achieving the best possible financial result by optimizing our financing framework,” summed up Heidelberg CFO Dirk Kaliebe.

In financial year 2017/18 we are focusing our corporate strategy on expanding the portfolio in growing markets, such as packaging and label printing, digital printing, selected consumables and software, also through targeted acquisitions. With the intelligent networking of our range of solutions, we are advancing the digitization of all printing operations for our customers and aligning ourselves to customers’ life cycles with new digital business models. The effects of this will not be noticeable in financial year 2017/18, but are expected to lead to continuous growth in sales from financial year 2018/19.

With our investments and innovations in the area of digitization, autonomous printing, packaging, label and digital printing and data-driven services, we maintained the Group’s leading market position in the year under review and, bucking industry trends, generated an increase in orders that should allow sales to remain stable year-on-year in financial year 2017/18.

As a result of the forthcoming transformation activities and the optimization of processes and structures, Heidelberg is assuming special items in the financial year ahead to be at the same level as in the year under review. Thanks to the continuous optimization of our financing framework, the financing costs are to be reduced further in financial year 2017/18, thus further improving the financial result. Against this backdrop and subject in particular to the tax risks described in the Expected Conditions section of our annual report, Heidelberg is again targeting a moderate increase in its net result after taxes, which should continue to increase in the years ahead.