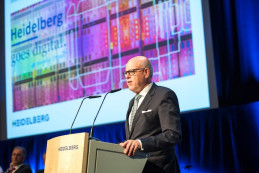 Rainer Hundsdörfer, CEO of Heidelberg, presented "Heidelberg goes Digital," during the AGM for financial year 2016/2017 held at the Congress Center Rosengarten in Mannheim.

HEIDELBERG, Germany — July 28, 2017 — Around 1,600 shareholders participated in the Annual General Meeting of Heidelberger Druckmaschinen AG (Heidelberg) for financial year 2016/2017, which was held at the Congress Center Rosengarten in Mannheim yesterday. Close to 30% of the company’s share capital was represented at the event.

The Management Board discussed the company’s strategy and the figures for the past financial year (April 1, 2016 through March 31, 2017) with the shareholders. CEO Rainer Hundsdörfer presented “Heidelberg goes Digital!” in his speech, outlining the future direction for Heidelberg with a strategic focus on technology leadership, digital transformation, and operational excellence. 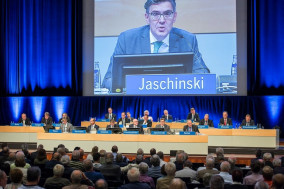 Dr. Siegfried Jaschinski, chairman of the supervisory board of Heidelberg, gave a presentation during the AGM.

Following the successful turnaround with a return to sustained profitability, Heidelberg will now also be aiming for growth. Group sales of around €3 billion are being targeted by 2022 through a large number of specific measures. The company has set its sights on a further significant improvement in profitability, with EBITDA of €250 to 300 million and a net profit after taxes of over €100 million. Sales in financial year 2016/2017 were just over €2.5 billion, EBITDA €179 million, and the net result after taxes €36 million. 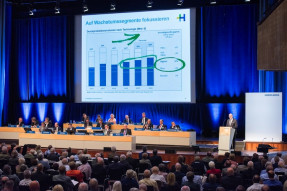 All items on the agenda at the AGM were approved with a clear majority.

Approval from the company’s shareholders was needed for six of the seven items on the AGM agenda, including Oliver Jung’s election to the Supervisory Board. All items on the agenda were approved with a clear majority.