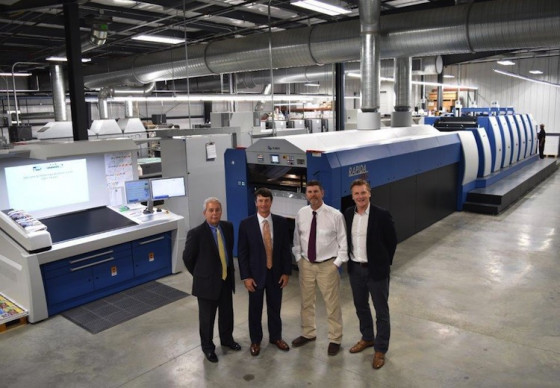 “We are truly honored to celebrate with our cherished customers and co-workers. Being a leading commercial printer in our region for more than a century, we are excited about all of our new equipment especially our centerpiece---the KBA Rapida 106 press---the first of its kind in North America,” says Doug Hederman, president and CEO. “This beautiful new facility, our ongoing commitment to our customers, and our years of service has been a humbling experience that has allowed us to continually grow and invest in the best technology in the printing industry.”

Guests lined up to receive promotional items such as personalized print stationary, and an official Hederman Brothers branded gift bag before they left on group tours led by employees. Later in the day, guests reflected on what they witnessed and met with their peers at an outdoor reception held under a large white tent. As guests mingled under the tent, they were treated with true Southern hospitality with fresh BBQ chicken grilled cheese sandwiches straight from the grill, Nashville chicken wraps, assorted fine cheeses and fruits, and a themed cake along with other sweet pastries from a local Mississippi bakery, and a variety of refreshments throughout the event.

Click here to read: Hederman Brothers Stays Ahead of the Times Through Major Investments

Prior to the open house, Hederman Brothers held an official ribbon cutting ceremony with the Madison County Chamber of Commerce, MCEDA, Ridgeland Chamber of Commerce, Madison County Business League and Canton Chamber of Commerce on the steps of its new location. Hederman’s new facility was strategically designed to be workflow-orientated — it provides a systematic flow with precise stationing of both people and equipment. In designing a more efficient layout, Hederman Brothers will be able to greater serve clients’ needs and continue to exceed customer satisfaction.

In addition to their move into a new facility, Hederman Brothers made a major investment in capital equipment that has broadened their capabilities in the pressroom, bindery and digital room. The renowned press that was exclusively featured at their open house event  was a Rapida 106 6+L with VariDry LED UV in the printing units and the delivery. The Rapida 106 press was recently installed and is Hederman’s first KBA press! In addition to a firing top speed of 20,000 sph, the press is equipped with high-performance features such as LED UV curing and QualiTronic in-line color control.

Hederman Brothers has been an early adopter of LED UV, in fact, they have been printing with it from day one and have transitioned to LED UV 100% of the time with their latest installation. The Rapida 106 is the first type in North America with dual high-power XP-11 LED lamps. Curing and color quality that’s capable with LED-UV is the reasoning behind why Hederman Brothers is a huge advocate of this breakthrough technology. They print on all variations of paper stocks and substrates with LED UV inks and LED UV Coatings.

By investing in a Rapida 106 equipped fully with LED UV, Hederman Brothers has been able to dramatically improve their day-to-day operations and their overall efficiencies. A esteemed press operator at Hederman of more than 23 years expressed how the new press has faster makereadies and dry time –no powder is needed with LED which dramatically increases turnaround time –optimizing time on the printing room floor.  They have been able to acquire new customers who require print jobs specific to LED (on uncoated pieces).  Hederman Brother’s customers realize the benefits of the transition to full LED as well as the ability to have spot UV- coating in their print runs.

Hederman Brothers has been able to bring a dynamic and fresh perspective on commercial printing and also share their commitment to providing the latest innovations and technology for their customers and the overall industry. Their dedication to the community and their customers has allowed Hederman to foster a customer-oriented reputation and continue to operate over a century in print.

Hederman Brothers was established in 1898 by brothers Robert and Tom Hederman in Jackson, Miss. In 1928, the firm purchased the first offset printing press to operate in Mississippi. After many years of steady growth, Robert’s sons, Zach and Henry, assumed control of the thriving company in 1938. For decades the firm continued to thrive. In 1982, Henry and his son, Hap, purchased the printing company from the other family members with plans of expanding the 40,000-square-foot office in downtown Jackson.

With business and technology booming in 1993, Hederman Brothers purchased its first six-color, 40" press with aqueous coating capability and moved to a new facility in Ridgeland, Miss., which nearly doubled the size of the downtown printing facility. In 1998, Hederman Brothers became an ISO certified company and celebrated its 100th anniversary. Since then, the firm has added a new division called Hederman Direct as well as a full line of digital presses. The company has relocated into a new facility in Madison, Miss., to accommodate its continued growth.