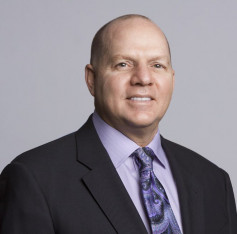 The understanding that people are the driving force behind any company’s success has been Mike Fontana’s main operating principle since 1994, when he and lifelong friend Chris Joyaux came together to found American Litho.

The two partners sought to deliver a better customer experience by truly embracing a Voice of the Customer (VOC) model. Fontana and Joyaux instinctively believed that it was not good enough to only listen to the individual pain points of each client; they knew they had to consistently deliver value-based solutions to solve those pains and, at the same time, deliver an improved return on investment.

Today, the company operates from a state-of-the-art facility in Carol Stream, Ill., and ranks among the top 30 printers in the U.S. and Canada, as ranked on the Printing Impressions 400 list. With dozens of awards to their credit, including top honors in two categories of the 2019 Premier Print Awards, American Litho was also named the best mid-sized company to work for in the Chicago region, according to the Chicago Tribune. 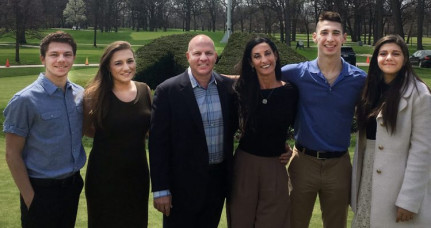 A sense of family comes first for Mike Fontana. He relishes the time that he can spend with his wife, Jeannine, and his four children.

Fontana credits every success and every accolade to the exceptional team he and Joyaux have attracted over the years. “From our earliest days, we’ve consistently sought out the best of the best when it comes to the people we hire,” he says. “But it’s more than just technical skill we’re searching for. We look for drive, passion, kindness, professionalism, and an overall dedication to be the best.

“We wanted to create a culture centered around our clients, one that facilitates daily collaboration,” Fontana adds. “The team we have now exemplifies all of those qualities and more. We wouldn’t be where we are today without each and every member’s contributions.”

American Litho has expanded over the years to include a full range of services, capabilities, and solutions that lend to the needs of all brands — boutique to Fortune 500 — including data analytics, predictive modeling, list management, graphic design, format design, postal optimization, and campaign consulting. This is coupled with high-speed, in-line digital and offset printing equipment with full variable personalization capabilities, and one of the nation’s largest inserting and finishing shops — all in-house and in a single location.

“It’s a unique facility, with literally every print service under one roof, allowing us to control quality, security, and fulfillment, dramatically reducing cycle times. Others say they have it; we actually do,” Fontana points out.

American Litho is tied to the industry through many associations; these key affiliations give it the ability to predict market changes. These relationships help it meet new client challenges and have been central to the company’s growth during the past 25 years.

In 2011, as commercial printing became more and more of a commodity, Fontana and Joyaux searched for new opportunities. Seeing the continuing need for expert direct mail services, the two decided to expand American Litho’s capabilities in that direction. Before long, the company was handling full-scale, variable data direct mail campaigns for a variety of leading brands. Today, it is a recognized leader in the direct marketing space, printing and shipping nearly a billion mail pieces per year. 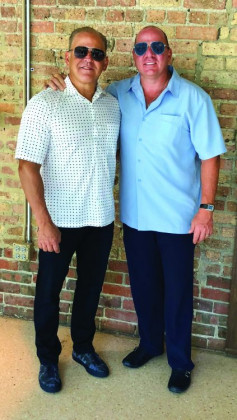 Lifelong friends Chris Joyaux (left) and Mike Fontana founded American Litho in 1994. They embraced a Voice of the Customer model to deliver a better customer experience.

The ability to see what leading brands need, backed by a willingness to invest in new technology, has propelled American Litho forward, Fontana believes. For example, when the opportunity came along to handle a major direct mail program for a large financial company, he realized that additional inserting equipment would be needed to manage the program smoothly.

“Within 30 days, there were five additional inserters on the floor, just in time for the project to move forward,” he says. “Our team rapidly integrated the new equipment into their workflow, helping us meet all of the challenges this new business brought us — and our client was very satisfied with the level of speed and service we delivered.”

Being at the forefront of the direct mail industry means making educated, solutions-based decisions that add value and serve customer goals in the most efficient way. “Making major investments in new equipment and expanding our capabilities into new areas might seem bold,” according to Fontana. “But I really believe that if you’re willing to make strategic moves that others aren’t willing to make, that’s when you see real growth.”

In 2011, Fontana and Joyaux made the decision to acquire Berlin Industries — another bold move, given the strong downturn the printing industry was experiencing at the time. The acquisition more than tripled the company’s production footprint, significantly increasing its plant space. This, in turn, fueled the expansion of American Litho’s web offset and sheetfed capabilities, ultimately paving the way for a major investment in digital.

To meet the full spectrum of client needs, American Litho expanded into packaging in 2017 with a major investment in people and equipment. Starting off right with the latest CAD modeling system, folders, carton gluers, and high-end diecutters, the business is outperforming expectations and is projected to double in size by 2020.

“Mike has the crucial ability to see multiple steps down the road,” Frank Arostegui, executive VP of sales for American Litho, says. “His vision has helped American Litho make amazing strides in a tough market.”

Arostegui points to the company’s investment in cutting-edge digital technology as another example of Fontana’s leadership. As the printing industry experienced a wave of automation in the early 2000s, many mid-sized companies struggled to stay current. Fontana and Joyaux chose to double down on their tech investment, adding Kodak S20 inkjet heads to American Litho’s web presses and finishing equipment in 2012. Since then, the company has added HP’s most advanced inkjet technology to its web and sheetfed environments.

Expansion of American Litho’s digital press capabilities has been another key to the company’s growth. During the past five years, the digital team has grown dramatically — today, they are handling a high volume of quality work on the company’s new HP Indigo 12000 digital sheetfed press and HP PageWide Web Press T240 HD.

While the company has grown and evolved significantly during the past 25 years, Fontana and Joyaux continue to lead in a highly personal way. Fontana’s open-door policy has served the team well. Associates from every department are welcome to connect directly with senior leaders on a daily basis, sharing their thoughts and ideas to ensure that no voice goes unheard.

Fontana’s commitment to supporting and developing his team may be the reason that so many employees have risen from entry-level positions to the executive ranks. In fact, several team members have been with American Litho since the company opened its doors.

His commitment to the well-being of American Litho’s workforce extends well beyond the walls of the plant. You will find Fontana relaxing with team members at holiday parties, taking part in the American Cancer Society’s Relay For Life, handing out more than 900 turkeys for the Thanksgiving holiday, and even attending a sporting event with employees. He not only embraces a healthy work-life balance, but also strives to build a strong, unified team where each individual feels respected and valued.

Amid the challenges of running a growing company, Fontana also makes room for family and fun. He is devoted to his wife, Jeannine, and his four children: Gianna, 24; Michael, 21; Joseph, 20; and Alexa, 19. He relishes spending time with each of them, whether he’s at a hockey game or a dads’ sorority weekend.

With his own parents, Don and Irene Fontana, living just down the street, Fontana feels enriched by the presence of three generations. “I love making memories with my family — and I wouldn’t sacrifice that for anything,” he says. In fact, Don Fontana was there from the very start of American Litho and just retired a few months ago. “He was instrumental in guiding Chris and I through many challenges along the way. We will always be grateful for his business acumen and countless contributions,” he adds.

Looking to the future, Fontana reveals that American Litho will expand its investment in targeted, digitally triggered activity monitoring, coupled with data-driven Amerilytics solutions, to help clients integrate the power of print with social channels. “Our investment in digital solutions will help focus customers’ campaigns on the front end by streamlining the data processes, which will elevate the effectiveness of what is mailed and improve the ROI.”

Staying in sync with emerging client needs and supporting its team members will propel American Litho forward. “We will help our clients achieve their most crucial marketing goals — and take time to celebrate our shared success along the way,” he adds.