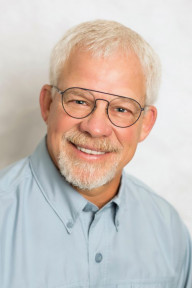 What is the role of a CEO? Ask Dolf Kahle, CEO and owner of Twinsburg, Ohio-based Visual Marking Systems (VMS), and he’ll say, “to grow the company, not run the company.”

For Kahle, growth is achieved in many ways, but alone is not one of them. VMS is a family-owned business, and Kahle is a firm believer in mentoring and fostering the professional development of his 130-person staff and engaging them in VMS’ strategic planning.

“Senior management is involved in it year-round, but twice a year, we work on a strategic plan for finances, marketing, personnel, equipment, etc., based on SWOT analysis,” he says. “It’s a team effort communicated to the entire company. I truly believe a company has to have a written strategic plan communicated across the board to be grown sustainably.”

Kahle also believes in leading by example and the concept of “management by walking,” ensuring he’s regularly on the floor, checking in with his employees. He will also attest to the mutual benefits of opening doors to others in the industry, even those considered direct competitors.

“There are a lot of people you compete against that won’t let you in their plant or past the front door of their office,” Chuck Huttinger, former owner and founder of GFX International, says. “Dolf is very welcoming. I’ve toured his plant many times and learned a number of things they accomplished through trial and error that saved us a lot of learning curves with technology over the years. That’s one thing I’ve always admired about him, and I adopted the same approach.”

It’s this type of leadership and collaboration that has contributed to VMS’ reputation as a provider of high-quality products and customer service, as well as its various accolades, including two consecutive Smart Business Customer Service Servant Awards and being ranked twice within the top 12 of Wide-Format Imaging’s Top 40 Printing Shops.

Most importantly, it is a leadership style instilled by Kahle’s own mentor, his father, Dr. Hermann Kahle.

Hermann Kahle, an electronic engineer, had been brought to the U.S. from Germany to be part of the early NASA rocket program. As his youngest child, Kahle ultimately followed Hermann’s footsteps, studying mechanical engineering at the University of Michigan before earning his Master’s in Business Administration at Arizona State University.

In 1982, after a brief stint in retirement, Hermann Kahle purchased what was then known as VM Corp., a small company founded in 1962 that sold screen-printed logo and letter decals to clients including Sears and Kollman. For Kahle, this was an opportunity to work with and learn from his father, who he says was a genius from the start. 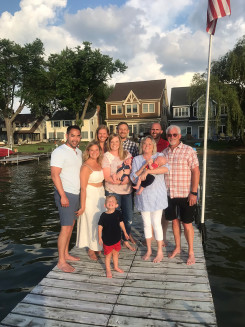 The entire Kahle family enjoys spending time together at their cottage that's located on a lake in Michigan.

“Since we had all these great corporate accounts and OEMs, my father said we needed to get into their purchasing and engineering departments and talk about their everyday needs,” Kahle explains.

In addition to its name change, VMS became a full-time manufacturer, utilizing UV screen printing, an unknown technology at that time. Despite a few hiccups working with different substrates, Kahle says they eventually mastered overlays. By the ’90s, VMS had established its reputation in the product identification market, leaving smaller niche markets they inherited from purchasing the business, and looking to OEMs and Fortune 500 companies as their source of consistent growth.

“Once you’re in and successful, they order decals from you every week or month, whereas if you’re going after point-of-purchase, it’s all determined by marketing that year, and you might lose that business,” he adds.

Kahle was named president in 1992, and his brother, Dieter, VMS’ HR director, joined five years later. Under the Kahle family leadership, the business has continued to expand its services, equipment mix, and space. Since its purchase, VMS has been moved from a 7,000-sq.-ft. facility, to now span 70,000 sq. ft. with two facilities. It was among the first ISO:9001-registered printers, the 37th printer receiving an SGP (Sustainable Green Printing Partnership) certification, and all employees are trained in Lean principles.

Kahle assumed the role of CEO in 2005 when his father retired. The majority of VMS’ business today is supplying decals, nameplates, and labels to OEMs. A quarter of the business is vehicle graphics, while the remainder is decorated apparel through its Badlime Promo & Apparel Div., and the public transportation market (decorating the inside of rail cars, buses, etc.).

The family tradition also continues with Kahle’s son Eric, who has worked at VMS since high school and is the master scheduler and Badlime’s operations manager. “We looked at it from the perspective of him and his father working together day in and day out and took this as an opportunity to do the same, spending the rest of our careers together and having fun growing the business,” Eric Kahle says. “For him, it’s an opportunity to teach me. He’s helped me through a lot of the difficult pain points in management and has been a great sounding board.”

Dolf Kahle says working with his son is a dream come true, but he had also wanted to ensure it was a good fit. After attending college and working elsewhere, it was important that Eric demonstrated a passion for the industry and shared what he would bring to VMS. “He is passionate about his career and has innate skills as a leader,” the elder Kahle notes.

With his father earning a PhD at age 76 and his wife, Marilyn, having spent more than two decades teaching and serving as a principal, it’s no surprise Kahle encourages continuing education through trade shows and industry organizations, while striving to mentor everyone in his organization.

“Dolf has a knack for seeing value in his employees and investing his time in their development,” says Ron Gizzo, VMS COO and Badlime president, who has worked with Kahle for 25 years, and is part of the PDAA Installers Committee and treasurer for GIGA International. “He saw it in me, and I’ve gone through that stepping-stone process working up to different supervisor and managerial jobs with him. He gives you the ability to make mistakes and learn from them.” 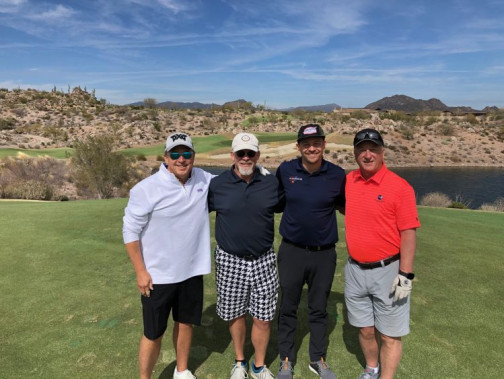 Posing for a picture after a friendly round of golf are, standing from the left: Chuck Huttinger, Dolf Kahle, Eric Kahle, and Scott Crosby.

Kahle himself has been highly proactive in the industry, including serving as chairman of the board for the PRINTING United Alliance (formerly SGIA) and SPIRE, a network of top industry executives, through which he met Huttinger.

“In professional groups, you sometimes have people who just show up for the group picture, and two people who do the actual work. Dolf is one of those two,” Huttinger praises. “He’s someone that really contributed and made an effort to leave the organization in a better place than before he got involved.”

For Kahle, industry events and affiliations present opportunities to build relationships and share ideas, whether with a customer, supplier, or competitor.

“I love getting to know the CEOs and presidents of our supplier organizations, and getting their thoughts on future ideas, where they see the industry moving, and what we can do to build our relationship strategically. I’ve always expressed to our staff that suppliers are just as important to us as our customers,” he says. “Similarly, by meeting my competitors, I’m learning what we can do better. I protect my intellectual property, but am very open to sharing with them.”

Adapting to Changes and Challenges

Like many of today’s leaders, Kahle has had to endure two crises: the Great Recession and COVID-19. Despite business decreasing 24%, he says VMS overcame the former by maximizing its digital printing capabilities to produce lower quantities at the same price point for its customer base.

As states shut down amid COVID-19, VMS received 94 letters from customers declaring the company a critical source in their supply chain for products including hospital beds and ventilator systems. With the business open, Kahle and his team put every health guideline in place, including sanitizing, social distancing measures, staggering shifts, checking temperatures, and requiring face masks. No employee has tested positive to date.

To maintain his full staff, Kahle applied for the Payroll Protection Program and currently has the company on a 32-hour pay scale. “Dolf has a big heart and cares a lot about his employees,” Eric Kahle says. “He took a pay cut before the rest of the executive staff, and then took another pay cut when we did.”

Enjoying the Present, Looking to the Future

When he’s not at the office, Kahle and Marilyn enjoy spending time with Eric and their two daughters, Megan and Krista, along with their three grandchildren. They often try to get the family together at their lake cottage in Michigan.

A self-proclaimed sports freak, Kahle also enjoys tennis, skiing, and his latest passion, golf. Thankful for the many cities he has visited through industry events, he and Marilyn are avid travelers, and have especially enjoyed seeing different parts of Europe, and their “instant vacation” destination, Napa Valley.

As in the professional world, Kahle has become more active in community organizations in recent years. He has been recognized as a Chamber Champion and Business Person of the Year by the Twinsburg Chamber of Commerce for his efforts, including providing signage to promote the city and its various events. He is also active in the Chamber of Commerce for his home city, Solon.

Having fostered the company and culture he and his father built, Kahle looks forward to continuing its growth and ultimately seeing where his staff and the next generation take it.

“Dolf has never been interested in selling the business. His full intention is to help all of his employees and their families, and he wants to continue that so long as the next generation is there to,” Eric Kahle concludes. “And I plan to carry that on."