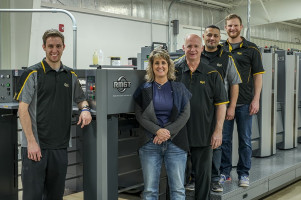 Graphic Promotions is happy with its ultimate decision to install an RMGT 790 LED-UV offset press rather than a half-size digital press.

Graphic Promotions Inc. (GPI), based in Shorewood, Ill., recently installed a fully equipped RMGT 790 press that features LED-UV curing technology. The shop has replaced two older 4-up offset presses, while increasing their size to a 6-up platform that runs at 16,000 sph. Daryl Sladek, the Owner of GPI, notes that his shop started out 25 years ago as a strictly offset printer, running pieces such as brochures, letter heads and other commercial print jobs. However, in recent years, he notes, “we’ve become a lot more digitally involved. The digital end is where we’re going, and that was the reason for the new press — we are trying to be more competitive in that market.”

GPI offers their highly selective customer base the finest in wide-format inkjet print production and has carved out a strong niche in the extremely high-quality end of that market.  Recognizing that this segment focuses on short runs, GPI originally considered adding a half-size digital press, but quickly found that what they really needed wasn’t a device that could do full-variable data, but rather a true press that could handle shorter runs of 250-500, while also producing 100,000 piece jobs when the opportunity came up. Their new RMGT 790, with the LED-UV technology and a full suite of automation technology, has fit that bill perfectly.

With no click costs or monthly maintenance fees, a 33% larger sheet and production speeds 4-5 times faster than digital, this true offset press will be producing for GPI until the end of the next decade and beyond.  “A lot of the automation has made things easier for us,” says Sladek. “The setup times and makereadies are faster, the LED-UV curing is excellent, and we can turn jobs much quicker.”

Not only is the RMGT 790 allowing Graphic Promotions to do shorter, faster, more efficient runs, Sladek also notes that he has the ability to run a much wider range of jobs. The shop, he says, has tested different substrates, including plastics and window-cling vinyl. "Those are some things we’re really going to focus on, printing on different and difficult substrates,” he notes. “I would have said I will never buy another offset press, but the way RMGT is handling things makes it a much more viable purchase. I saw that logic.”

“I sold Daryl his three previous presses in my past position, and have known him since the ’80s, when we were in our early 20s together,” says Derek Gordon, Regional Manager, Graphco. “I went out to give him information about some of the digital presses on the market, as well as the RMGT, even though he was saying he wanted to get away from traditional offset. But when we put pencil to paper and showed him what he could do with LED-UV, his eyes opened up. And when we proved that we could take out two older legacy machines and replace them with one press that could do a larger sheet size, shorter runs and higher quality print, he saw that offset was the clear choice.”

While the new press was just installed in early spring, and GPI is still getting comfortable with it, Sladek is already seeing that the RMGT 790 will make his shop more competitive. Jobs he previously stayed away from are becoming targeted projects, opening up new growth opportunities while better serving his current customer base. “I’m guessing we’ll see about a 20% increase on the offset side over the next year,” says Sladek.

“This is a great example of why offset is still such a strong technology, even in today’s digital world,” said Chris Manley, President, Graphco. “True variable data jobs are just a small percentage of the short run work out there. And our RMGT offset press can tackle the huge portion of that work that is static, in most cases, for far lower cost than digital, with higher quality and a wider range of substrates. Graphic Promotions realized that offset is still a rich, vibrant and, more importantly, profitable print technology. Graphco is very pleased to be a long-term partner to Daryl, Stacey and the rest of the GPI crew, and we are ready to help them continue to grow and evolve for their next 25 years in business.”

END_OF_DOCUMENT_TOKEN_TO_BE_REPLACED
Happening Today
The Powerful Case for US Book Manufacturing