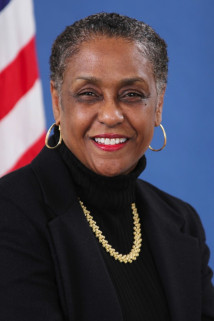 WASHINGTON - November 1, 2017 - The U.S. Government Publishing Office (GPO) Director Davita Vance-Cooks has announced her departure from federal service to accept a job in the private sector. By law, GPO Deputy Director Jim Bradley assumes the duties of Acting GPO Director until a replacement is appointed.

Vance-Cooks was nominated by President Obama and confirmed by the Senate in 2013 to be the 27th Public Printer of the United States. Prior to confirmation, she served as Acting Public Printer for 19 months. A seasoned business executive with more than 35 years of private sector and federal management experience, she was the first woman and the first African-American to lead the agency.

In 2014, legislation proposed by Vance-Cooks was signed into law modernizing the GPO’s name to the Government Publishing Office, in recognition of the agency’s successful transition to digital publishing technologies. That law also abolished the outdated title of “Public Printer,” renaming GPO’s chief executive as the agency’s Director.

Continuing her strategy of leading GPO in the digital era, earlier this year Vance-Cooks called for modernizing the laws governing GPO’s Federal Depository Library Program, which involves making Government information and documents available to the public through more than 1,100 libraries nationwide.

Vance-Cooks leaves behind a legacy of achievement and fiscal responsibility at GPO. Under her leadership, the agency cut costs while improving services, generating positive net income each year and consistently receiving clean opinions from annual independent audits of GPO’s finances.  She reversed the previous decade’s pattern of requesting ever greater appropriations from Congress while overseeing increased digital productivity and transformation. During her tenure GPO acquired digital equipment, developed new digital products, and implemented digital processes.

Vance-Cooks championed a strategy of modernization that resulted in expanded public access to digital Government information. GPO diversified its product and service portfolio to include eBooks, mobile apps, and bulk data downloads.  The agency moved forward with plans to become the first federal agency to meet international standards as a trusted digital repository, expanded its product line of secure credentials, and was the first legislative branch agency to move its IT capabilities to the cloud. Vance-Cooks’ objective was to move the GPO from a print-centric to a content-centric focus in the digital era, a strategy that was validated by a congressionally-mandated study of GPO by the National Academy of Public Administration in 2013.

She pursued an equally energetic agenda in GPO’s production operations, where the agency readied its systems and infrastructure to produce the next generation U.S. passport, upgraded its press and binding systems with state-of-the-art equipment that is reducing the costs of producing congressional and agency documents, and laid the foundation for further efficiency upgrades to its business systems. While Vance-Cooks was GPO’s Director, the agency won multiple digital achievement, graphic design, and innovation awards, including most recently the prestigious W. Edwards Deming Award for GPO’s innovative employee leadership training program.  It also earned updated certifications for quality in passport manufacturing and as a sustainable green production facility. Her policy of employee engagement resulted in ratings of the agency as a “best place to work” and as an “innovative agency.”

Prior to assuming leadership of the GPO, Vance-Cooks held a succession of senior management positions at the agency beginning in 2004. She was the Deputy Managing Director of Customer Services, with the responsibility for overseeing the GPO’s liaison with federal agencies for in-house print production and printing procurement services. She then served as the Managing Director of GPO’s Publications and Information Sales business unit, where she oversaw a large print distribution/supply chain operation with customers across the United States.  In January 2011, Vance-Cooks was named the GPO’s Chief of Staff, and in December 2011 she was named Deputy Public Printer.

Before coming to the GPO, Vance-Cooks held several private sector leadership positions in the health insurance industry. Vance-Cooks holds a B.A. from Tufts University and an M.B.A. from Columbia University.