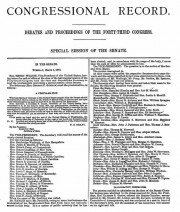 WASHINGTON - January 3, 2018 - In cooperation with the Library of Congress, the U.S. Government Publishing Office (GPO) has completed the digitization of all historical issues of the Congressional Record dating to the first appearance of this publication on March 5, 1873.

The final release of this project, covering the period 1873-1890, is being made available to the public free of charge on GPO's govinfo.

Today’s release covers the debates and proceedings of the House of Representatives and the Senate from the 43rd through the 51st Congresses. 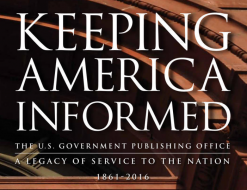 For this project the Library created digital images of the Congressional Record pages. GPO devised the necessary metadata to preserve the pages and make them accessible and searchable by users across a variety of digital platforms. It is one of a series of projects in recent years in which the Library and GPO have collaborated to expand free public access to congressional information in digital formats.

For background on the Congressional Record and the importance of this document, see GPO’s official history, Keeping America Informed: The U.S. Government Publishing Office 1861–2016: A Legacy of Service to the Nation, Washington, DC:  GPO, 2016; pp, 18-19.

The period of 1873-90 in Congress was notable for a number of events including:

"This final digital release of the historic issues of the Congressional Record gives the public easy access to the historic debates of Congress on smartphones, tablets, laptops and personal computers," said GPO Acting Director Jim Bradley. “We are pleased to have completed this project with the Library of Congress to provide the public with digital access to this publication that traces the history of our life as a Nation since 1873.”