There’s good news on the horizon for those in the print space involved with ad spend dollars — marketing and advertising campaigns — especially in the out-of-home sector (OOH).

The latest ad spend forecasts recently published by Zenith, Dentsu Aegis(Carat) and Magna Global mention that global conditions are set to improve in 2018 with major events such as the Winter Olympics & Paralympics in South Korea, the FIFA World Cup in Russia and the US Congressional elections partly driving ad expenditure.

Ad spend is a good indicator of growth. In Q2 the numbers show that even though there is both political and economic uncertainty and advertisers are hesitant in 2017, but there is renewed optimism looking ahead to 2018. 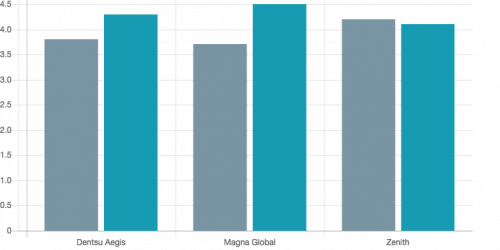 OOH Remains Strong
Digital, according to Zenith's 2016 to 2019 forecasts, is the main driver of global ad spend growth, and TV and OOH advertising will be the second and third-largest contributors to growth.

Focusing on the OOH market, Magna Global's forecasts show OOH will remain strong in most markets, growing by an average 4% which is similar to the growth seen in the last eight years.

Regional Trends
These forecasts point to a slightly slowdown in the US and UK markets. However, in the case of the US, per ZenithOptimedia shows it being the leading contributor to the global market over the next three years, making up in scale what it lacks in speed.

According to Dentsu Aegis, the advertising spend in North America is forecast to increase by 3.6% in 2017 and 4% in 2018 to reach $230B USD, achieving a 39% share of worldwide advertising spend — the largest share of any region. The forecast for 2017, however, has been revised down marginally from the 3.8% forecast in the September 2016 report. This is in line with an adjustment to the US ad market forecast, following a slow start to US advertising expenditure in Q1 2017. Momentum is expected to pick up in subsequent quarters.

The US advertising market experienced positive growth throughout 2016, finishing up 5.0% vs. 2015. This growth was boosted by approximately $8.8B USD in additional spend around the Presidential elections ($7.5B USD) and Rio Olympics & Paralympics ($1.3B USD). The outlook for the US ad market for 2017 remains positive, with an expected year-on-year growth rate of 3.6% to reach $212.2B USD. Total US advertising spend in 2018 is forecast to reach $220.8B USD, a 4% year-on-year increase.

In the UK, Dentsu Aegis reports that the ad spend market demonstrated a cautious approach leading up to the UK referendum on June 23, 2016, but held up better than expected following the vote to leave the European Union. Overall advertising expenditure grew 6.1% in 2016, exceeding the previous prediction made in the September 2016 report of 5.4%. Investment in the UK advertising market is predicted to slow down in 2017 to 4.0%, but at £19.1 billion it remains the 4th largest market globally in terms of advertising spend.

According to the Dentsu Aegis report, traditional Print continues to decline as advertisers divert investment into digital. Newspaper ad spend is forecast to decline by 12% and Magazines by 4.9% in 2017. However, the market continues to evolve and fight back with better practices, amalgamations, content generation, distribution and data. Consumers are looking to ‘trusted’ publishing brands to reliably source their information and shape their opinions, which was apparent when most newspapers saw both a circulation and readership increase around the Brexit debate and result. For example, The Independent website saw a month-on-month traffic increase of 43.8% between May and June 2016, compared to a decline of 3.3% over the same period in 2015.