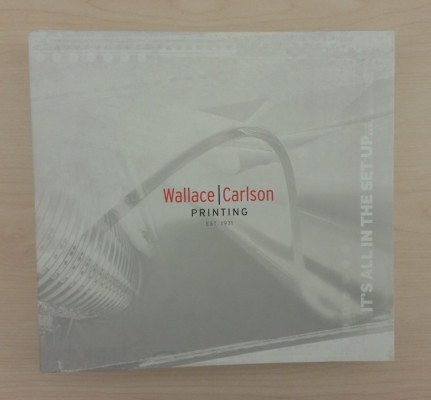 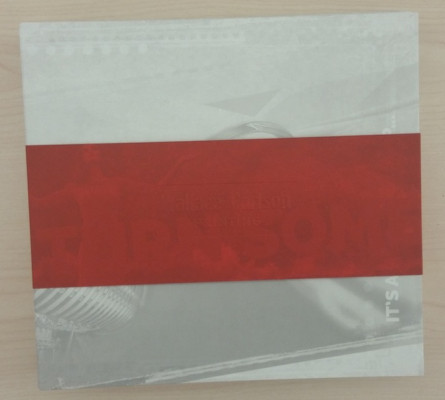 The promotional piece is neatly wrapped with a red paper ribbon.

The first booklet in the box offers a glimpse into the company, its values and capabilities.

Three generations later, the company still shows the same innovation, commitment and dedication that made it successful.

The company still has the same innovation, commitment and dedication that it was founded on in 1931.

This page in the booklet emphasizes that Wallace Carlson Printing is still making an impact with print.

Through its Green Initiative, the company is reducing its environmental footprint.

The marketing services team helps companies to elevate their brand.

The front and back of the second booklet.

The second booklet was created for writing down notes and ideas. 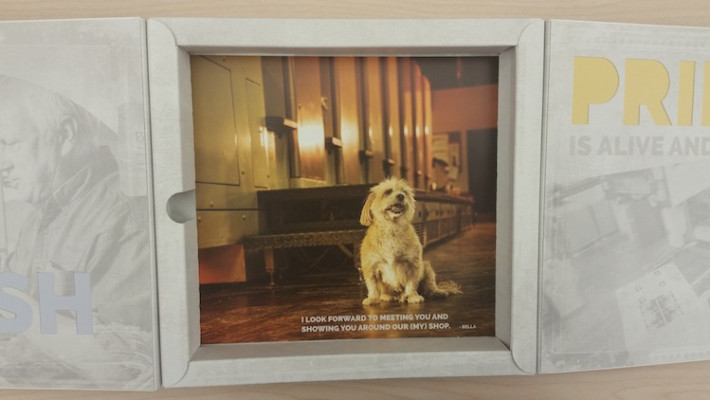 Take out the two booklets in the box, and there's Bella again.

A back view of the box.

PHILADELPHIA — April 7, 2016 — This 2016 Gold Ink Awards entry was submitted by Wallace Carlson Printing in Minnetonka, Minn., and entered into the Sheetfed Brochures category. Titled "It's All in the Set Up ...", this promotional piece was designed to show the wide range of capabilities the commercial printing company offers and the value it places in its skilled employees — in a very clever, creative and inspiring way.

The complete promotion consists of three components, a box neatly wrapped in a red paper ribbon that, when opened, contains two booklets — one that offers a behind-the-scenes look at the venerable printing company, and a second booklet for writing down notes and ideas. It is the detail throughout every component of this Gold Ink entry, and the beautiful photography combined with vivid colors, stunning visual effects and embellishments that really makes this piece stand out. CEO Ann Turbeville's dog, Bella, also plays a starring role as the company pooch, inviting prospects to tour Wallace Carlson's facility.

Toyo inks were used, and several varnishes and aqueous and UV coatings were incorporated to create multiple special effects. According to Mike Worthington, VP of sales and marketing at Wallace Carlson, the H-UV technology along with the various stocks and coatings, required a unique printing approach to each individual section of the piece.

According to Worthington, while this piece tested the entire Wallace Carlson creative and production teams, it also brought out the best in them to pull it off so exceptionally. "The whole project was unique — from concept and design to print and finish. And, judging from the great response we've received, other people also agree," adds Worthington.

Do you think you can beat this Gold Ink Awards entry? If so, let’s see your best work! Click here to choose from a complete list of categories and to learn more about why you should enter the printing industry’s most prestigious competition. Return your entries by the June 17, 2016!

All of the top winners will be recognized on the Gold Ink Website, through our social media platforms, and in Printing Impressions. Additionally, we will be regularly selecting a "Best Entry" that will be promoted across our multi-channel platforms.

Interesting Facts About This Project

The entire piece is a testament to Wallace Carlson Printing's "Green Initiative."