Get Inspired! This Wrap Is No Bogey 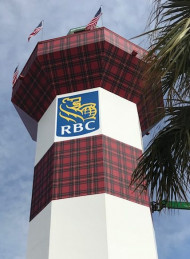 To commemorate the 50th anniversary of the RBC Heritage Golf Tournament, the famed Harbour Town Lighthouse, which also turns 50 this year, was given a temporary golf-themed facelift.

“They wanted to do something very special and very visible to celebrate these milestones,” explains Al Kennickell, president of the Kennickell Group, a print and wide-format provider based in Savannah, Ga. “They asked me if it could be done and I said yes. We had to make sure all the stripes in the plaid lined up. Every panel we printed was carefully marked, so the instillation went very smooth. It has been a huge hit, and it exceeded everyone’s expectations.”

The Kennickell Group had to do a lot of measuring and testing of materials. The shop needed something that would stay for a few months but come off without damaging the historic structure. “We applied several materials two months in advance of the wrapping and went back to see how they did,” Kennickell says. In the end, an HP 3500 Latex Printer was used to print the design onto ORAFOL ORAJET 3953 Brick Stone Film, which was laminated with an ORAGUARD 290 matte finish. More than 3,300 square feet of vinyl was printed and cut into sections that had to be clearly marked for proper installation.

“We were certainly surprised when we first received the call from Kennickell, but very excited at the opportunity” says Craig Campbell, market manager for graphic innovations with ORAFOL Americas. “We understood that product selection was paramount to the success of such a high-profile installation on such an iconic symbol, so we all worked together months in advance to ensure we had the right combination of materials for the project. From concept to reality, this was truly a lesson in flawless planning, execution and teamwork.”

Kennickell hired Jeremy Conner from “Who Did That!?!” for the install, a provider of installation services for unique structures, since this was a different kind of project from what the shop is used to. “It is nine stories high, so we needed people used to working on cranes at heights,” notes Kennickell. “Jeremy’s team did a great job.” A giant lift was used to reach the top of the nine-story structure, and the installation took four days.

“We have wrapped NFL stadiums, skyscrapers and water towers, but never have we wrapped such an iconic and famous structure. It was a privilege and honor to be chosen by the Kennickell Group to partner with them on this project,” says Conner.

Concept work began in November 2017, but there was only a two-week window in February to print and install. It had to be ready for the 50-day countdown party on February 18 for more than a thousand VIP’s and tournament volunteers. “We printed over a half-mile of vinyl in two days, started the install on February 5 and finished on February 8,” comments Kennickell. “We had hundreds for people watching every day.”

“This was a very high profile project that required a great deal of planning and engineering,” explains Kennickell. “It was our mission to complete the project on time with no surprises. With all eyes watching while we converted a local landmark, we certainly didn’t want anything to go wrong.”

“It surpasses all my expectations,” stated Angela McSwain, marketing and communications director of the Heritage Classic Foundation. “This was such a fun project and the finished product is fantastic!”

Since the town is so in love with the lighthouse’s new digs, the installation will be up at least until the end of summer, instead of the original plan to break it down end of April. This wide-format project with a nod to classic golf culture deserves more than just a quietly rolling golf clap.