CINCINNATI—July 22, 2015—For the sport of professional baseball the all star game is a big deal. It can also be a game changer for virtually any grand-format printer in the world.

The All Star Game's 75' zip line tower in construction.

"This was a significant event management project. The logistics alone posed some real challenges," noted TJ Bedacht, president of GCI Digital Imaging. "Regardless, this was not GCI’s first time up to bat in the big leagues (been there). In about a week and a half we produced over 20,000 square feet of mesh and over 95,000 square feet of 13 oz. banner. Additionally, a week before the game, the MLB called us at 9 a.m. with special request projects and 45 minutes later they’d have it in hand. We had to knock this one out of the park for MLB and it was a grand slam for everyone involved.” 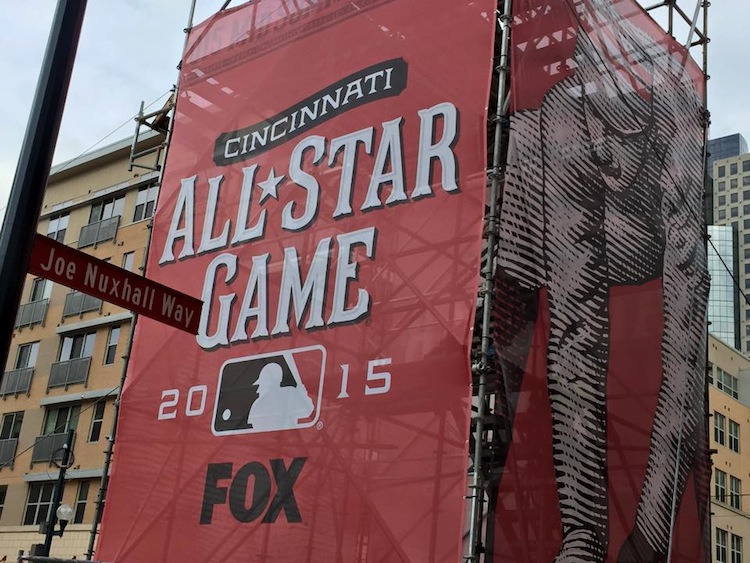 The banner on the All Star Game's 75' zip line tower.

GCI devised the plan, production, installation, and de-install for anything from pitcher’s mound covers, banners for a 75-foot zip line tower, as well as several stadium banners. GCI provided dugout banners for an All Star Fantasy Camp, Hitting Challenge, as well as thousands of square feet of signs, banners and directional signage for a Pepsi sponsored block party held before and after the game.

The demands and time management challenges allowed only a small margin for error. Perhaps even more surprising was that GCI’s bases were loaded with their routine workflow without disruption.

“The GCI team needed to be spot-on from the first inning until the bottom of the ninth and we delivered. The MLB expressed their delight with the entire project and were more than satisfied," Bedacht added.

Commenting on the completion of the project, MLB said, "Your team is great by the way...hardest working team by far. Thanks for dealing with all the craziness!"

Staff at GCI roll out signage produced for the 2015 MLB All Star Game.

Ultimately it was about GCI’s ability to produce exceptional custom made products at a moment’s notice. GCI had to respond quickly and remain poised under extreme circumstances.

"When folks call us, they can relax because they know we deliver every time. We are family owned; and printing has been in our blood since 1928," relayed Tom Bedacht, founder of GCI Digital Imaging. "We’re capable of putting event packages like this together at any size, for anyone, anywhere. In this business, mastery of the unexpected goes with the territory. As a matter of fact, we thrive on it."