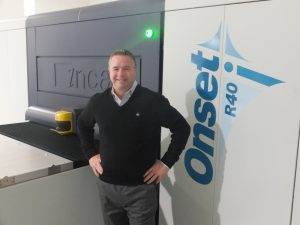 “Since we’ve had the Onset R40i, we’ve been hiring additional sales staff, this is a great area of growth for us,” said John Schiele, president, Schiele Group. “This machine is just amazing, it literally runs and runs, and we never have to reprint anything because of the quality of the output.”

Running two shifts per day, five days a week, as new jobs come in, Schiele Group is running several hundred different items, sizes, shapes, and, a lot of backlit on their Onset.

“With regard to the throughput, the quality, this machine is very consistent,” says Schiele. “It’s easy to produce two-sided output, with perfect registration. With our previous equipment, it was just brutal to print one side, and then attempt to feed it back through on a latex machine.”

From a quality standpoint, when new jobs come in, they head straight to the Onset.

“Everything always goes to the Onset first,” said Schiele. “Turnarounds are much, much, quicker. The Onset is our go-to machine.”

Schiele talks about a previous flatbed that caused him many problems, such as the ‘lawnmower effect’ and balancing the light colors, along with electrical and mechanical issues.

“I ended up returning it, leaving me with nothing,” adds Schiele. “And then I was able to acquire the Onset from Fujifilm, and in regards to quality, there was not a press out there that had any better quality.”

Schiele is pleased with the full width of range on his Onset, particularly when solids come off the bed. “I don’t have to worry about banding, anywhere,” says Schiele.

In 1948, Henry Schiele opened a small print shop in an old barbershop. With two small presses, a desk and a phone, Henry began the modest enterprise that would eventually grow into the integration of eight companies that make up the Schiele Group. The values by which Henry lived are still what guide Schiele Group today. They include hard work, personalized service and a drive to always do their best. These values have helped the Schiele Group grow into one of the largest printers in the Chicago area. Today, the Schiele Group is a multi-plant enterprise that produces more than 2 billion pieces of printed materials a year.

“I have a great partnership with Fujifilm. And I appreciate being included in their research and development. To that, I’m very well taken care of by Fujifilm,” concludes Schiele.